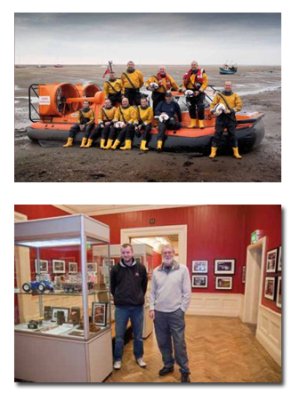 I have lived by the sea for my entire life. The Wirral Peninsula is surrounded by the Rivers Dee and Mersey on two sides and the Irish Sea on the third. Apart from a ninemonth spell of living about a mile away, the remainder of the 62 years have been lived between 80 and 800 yards from the sea. Everybody in our neighbourhood, with its extra-strong TV aerials and fully-nailed roof tiles, is well aware of the destructive power of the sea and wind. With it comes danger, and with danger comes lifeboats, tasked with rescuing the imperilled, unlucky and downright foolhardy from the clutches of the deep! Very few people in the area do not know at least one person who is involved with the lifeboats.

My own lifeboat memories go back to the 60s when the sound of two maroons would send us scurrying down to the seafront. We witnessed some amazing scenes as the slipway-launched service boat, the Panto, fought huge swells and wild winds as she clawed her way, yard by yard, to the mooring in the River Mersey, so that the crew could board the allweather, Barnett-class, Norman B Corlett. Panto got her name because she was bought with the proceeds from the 1954 Liverpool University Panto day. She is still in service as a harbour ferry and work-boat in Cowes, on the Isle of Wight. 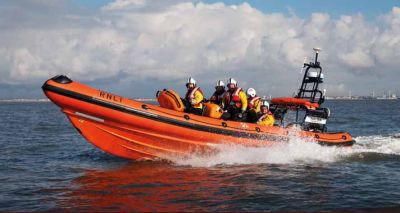 Topically, the Norman B Corlett was preceded by the William and Kate Johnston, another Barnett-class lifeboat from 1923 until 1950 (Prince William serves out of Anglesey on Air Sea Rescue and thus with some of the local crews).

The William and Kate was designed as a prototype by James R. Barnett who was a consulting naval architect to the Royal National Lifeboat Institution. She was the first Barnett class lifeboat and at the time of her launch, she was the largest lifeboat in the world.

In 1973 the Norman B Corlett was replaced with a beach-launched craft, (a high-speed inflatable, the Charles Dibdin, an Atlantic 85 Rib) and an inshore rescue hovercraft (the Hurley Spirit). The latter is needed to service the, sadly frequent, incidents of the public being trapped by the treacherous and fast-moving tides about these parts (there's usually a dog involved in there as well!).

The project began a year in advance of the exhibition and, like many of these ventures, it grew and developed as time went by, although in this instance it stayed very close to the original concept (the name changed from Lifefirst 2010).