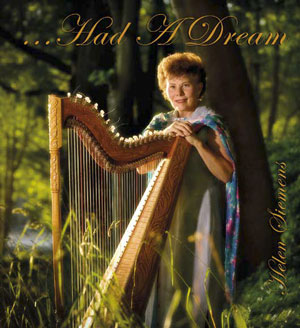 I've noticed that my energy isnot quite as great as it once was(thank God!), and so I'm usingmy brain more to find ways tobe more efficient. Lighting onlocation is a perfect example; I loveworking with mixed light, I meanwhat an incredible bonus - I cancapitalise on the existing light tosave time and money. Image 001 is agood example of a perfect marriageof magic-hour light and off-cameraflash.

Here's the story behind this image:A while back I was approached bythe agent of harpist and recordingartist, Helen Siemens, to shoother upcoming album cover. SinceHelen's music is very soothing, shewanted to reflect this in an imageby including her great love of natureand so it was decided that she shouldbe photographed in a wooded area.I thought that the warm bitter-sweetemotion one often feels at sunsetdue to the beautiful light at thattime would lend itself to expressingher music pictorially and so decidedthat the location must be a forestedarea in and around magic hour. Ifound the perfect location that wasreally quite spectacular just beforesunset - a spot near my home wherethe forest ends at the ocean. At thislocation, if you point your camerato the north, the frame provides abeautiful backdrop of trees and tallgrass, while allowing the setting sunto stream in on the scene from a lowangle from the west (end of July justabove the 49th parallel); and sinceit was coming across the ocean,nothing to impede its warm rays. 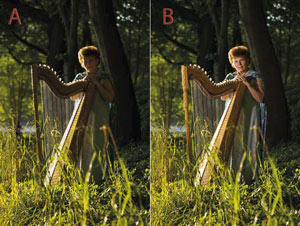 I knew that I had to do some lightingbut since the budget for the shootwas not like that of an advertisingassignment for an advertising agency - it was client direct - I neededto refrain from extravagance. With that in mind I chose, as mentionedearlier, an easily accessible location and figured out a lighting scenariothat would entail minimal equipment and minimal personnel so thatI would not have to spring for a Vancouver City Parks Board shootingpermit. When taking the shot, to allow the lighting to create depth anddrama in the photo, I wanted to shoot at the perfect moment so thatthe light from the sun (free of charge my friend) would skim across thesubject, harp, foreground and background rather than front-lighting theset - a flat look at best. I waited until the sun was positioned so that it'slight would spill onto the back camera-left-edge of Helen. To spend aslittle time as possible at the site for the shoot - having no permit, I didn'twant to attract the attention of the park warden by staying too long - Ichecked it out during my evening walk the night before to select theperfect time to arrive and shoot. I had Helen's agent hold a Speedlite overher head to the camera-left-side of Helen, some 2-3 metres from Helen'sside. The positioning of this off-camera flash would make it look like the sunwrapped around a little further than it really would so I could light up thefront of Helen's face which would otherwise be in shadow, compare A & Bof Image 002. It's cheating a little - it's as if you are bending the sun aroundto hit the face - but it ensures that the beautiful back-lit 'shadows forward'look is maintained throughout the scene. I really dislike the alternative -on-camera flash gives a flat cutout look and looks fake. Adding a lightingmodifier, like a soft-box or octabox, to the flash-unit would have createdsofter, more forgiving light on Helen's face, but the smaller flash sourcewas more realistic to sunlight and it would attract less attention from theauthorities, besides I do own Photoshop so a little more retouching thanusual would be a fair tradeoff.