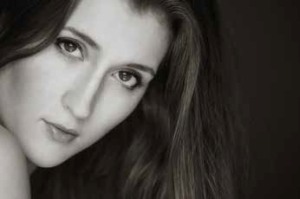 Hello there dear photographer friend. It's late October as I'm writing this and it's dark and dreary outside so it's the time when many photographers retreat into the studio - so I thought I'd spend this edition exploring a great technique for beauty lighting, the Clamshell set-up. It's one of the easiest and most effective techniques for adding real gloss to your subjects. If you were one of the lucky ones who came along to the Digital Imaging Show in Birmingham, you may have seen Kerry and I demonstrating it. We will certainly have it in our repertoire at the Convention.

It may be a set-up you already use, albeit unwittingly. I start all my shoots with natural light headshots. Finding some muted light and having my subject sit down and putting a reflector on the floor in front of them. Instant Clamshell. You have the natural light coming down onto your subject, filling their face with light and then bouncing off the reflector to lift any shadows forming under eyes, nose or chin. That's Clamshell lighting in the raw. The majority of the light comes from the top with a lower power fill light from below. How you achieve that, well let's explore a few looks.

The first is what I talked about earlier. Here we have Kat sitting in the doorway to my studio. It was afternoon and so there was no direct sunshine coming through the door. I sat her on a stool and placed a silver California Sunbounce on the floor in front of her. This really lifted the shadow areas and gave a nice crispness to the skin tone. (PIC A) Spot metering from the skin tone gives the exposure and shooting with wide open aperture on a 70-200mm lens at f2.8 gives a lovely shallow depth of field. 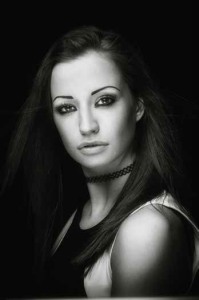 However, I did say that this was a technique for the gloomy winter days so let's take it into the studio.

In this first image we replicate the doorway technique using one flash and a reflector. The flash is my trusty Elinchrom Quadra Ranger but how to modify it? Your choice of modifier will have a huge influence on the way the image looks. For instance, a soft-box will drop soft light all over your subject with long transitions between light and shade, an umbrella even longer transitions whereas a small grid will go from light to shade extremely abruptly. My modifier of choice is a beauty dish, silver on the inside and placed close into the subject. For female subjects I put a softening sock over the front of the dish, for males I leave it off for a harder, grittier light.

It's preferable to have a boom arm on which to mount your key light in order to get it straight in front of your subject. Putting it on a stand will mean you're competing for position with the stem of the stand or you have to put the light to one side which will create shadows.

In this first image we see the effect on Kerry of a beauty dish and reflector combination. Shot at ISO200, 1/200s and around 6ft from the backdrop. Because the beauty dish is close in to her there is very little spill, giving a dark black background and crisp clear light on Kez. (PIC B)