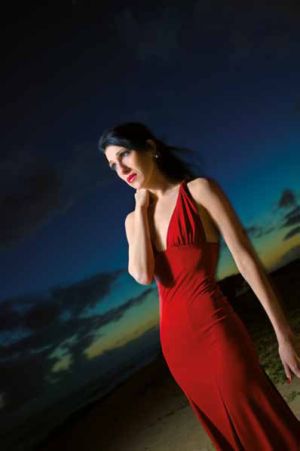 What do weddings, wars, and sunsets have in common? Fleeting moments. And for photographers, these offer some of the most stressful conditions to shoot under. Now shooting sunsets is no big deal, but if that sunset is a key component of a shoot that involves a subject that needs to be professionally lit, it is right up there with weddings and wars. The photographic lesson I'm about to set down revolves around such an image that went so right after everything went so wrong (see Image 001). I created this image during an assignment in Hawaii that involved lighting and capturing a series of images of a Hollywood actor/writer Sherri Synder. As the shoot unfolded, it quickly became an exercise in thinking on your feet and letting everything go that you couldn't change or control so that you can concentrate on making a decent image. To capture the fleeting beauty of a sunset, time is of the essence and so if you are planning to light a person in front of such a spectacle, then you need to arrive well before to set up and work all the bugs out long before the magic moment.

This Hawaiian trip was to consist of several real photo assignments that would also be captured on HD video for Adobe TV as an educational series on location lighting using tethered shooting with Lightroom. For the project we had a small crew: myself, Rick Miller of Adobe USA, cinematographer Megan Sinclair, and then local talent for hair, make-up, and assisting. Both Rick and Megan organised the locations, accommodation, car rentals, and lighting gear from California, before meeting me in Hawaii. They did a great job setting it up, however, no amount of organising could have prevented delayed flights and a last-minute sickness of the make-up artist, both of which put us some five hours behind schedule. After much scrambling we arrived at the sunset location 15 minutes before sunset and so the race was on. We had a ton of lighting gear and no time to transport it half a kilometre from the parking lot over some rough terrain to the shoot site on a beautiful stretch of beach on Sand Island near Honolulu, let alone set it up. Determined to get something on this first day, we tore through the gear, dumping into my emptied camera bag only what we thought we would need: digital SLR camera, a couple of zoom lenses, a speed-light (camera flash) with radio slave, a roll of duct tape, a flash meter, and a flashlight; all the real lighting equipment was left behind at the parking lot. With Sherri already made up and costumed, we literally ran to the spot. With the sun already set, Rick in preparation for creating a mixed light image, assembled a speed-light and radio slave while I composed Sherri against the quickly fading sky. During these frenzied moments, I chose f5.6 as the perfect aperture for depth of field for this image, then took a couple of in-camera meter readings to find an appropriate shutterspeed for the f5.6 aperture setting for what I thought would be the perfect exposure (f5.6, 2 seconds at 100 ISO) of the sky background. To dial in a suitable exposure on the speed-light, which Rick (now acting as a human light-stand) aimed at Sherri, a flash meter with its incident dome directed toward this main light was brought into position next to Sherri's face - for more information on flash meters, see the callout box entitled 'Flash Meters'.