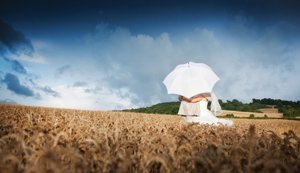 Like every good professional, Morag McDonald puts as much back into the business as she takes out, and as well as authoring a definitive book on wedding photography she's also a keen trainer Morag McDonald had the good fortune to know exactly what she wanted to do very early on in life. She was the child who was always taking pictures, the one whose dad sorted her out with her first serious 35mm camera at the tender age of 12.

In her mid twenties Morag finally decided that photography was the path she wanted to follow and she enrolled in a degree course in documentary photography at Newport. "I studied there under Clive Landen and Paul Seawright," she recalls. "The training I received from them still influences my work today although my style has evolved, driven by my love and passion for photography."

Starting off her photographic career in the fashion and press sectors, Morag also worked for a while for a schools company. By 2000 she had built up a substantial freelance career doing what she loved and, following the birth of her first child, she changed direction slightly and took time out to set up a highly successful documentary wedding business.

There were other projects that took place around the fringes of her business that drew upon her in-depth knowledge of the medium she was so heavily involved in and her desire to put something back into the business. In 2001 she was invited to write a new AS and A level course at Weston College where she taught part time until 2004. The following year she was approached by an agent to write her book 'Wedding Photography; a professional guide,' which was published by Argentum in early 2007. Later that year she moved into her current commercial premises at the Paintworks (Bristol's new creative quarter) where her business has grown and is still continuing to flourish.

Alongside wedding work and portraiture Morag shoots various commercial jobs and, together with Jo Webster, she runs a series of well constructed courses for both professionals and those looking to gain a little more understanding of what their camera can do. She's a regular lecturer on the university circuit and has won a number of awards for her photography over the past few years, building on her success by focusing on her strengths and adapting these to the needs of her burgeoning client base.