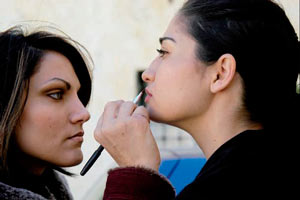 For many of us, international trips begin with a leisurely coffee in an airport departure lounge. That's until you plan a training trip to Malta. Enjoying a well-earned deep sleep after a long drive back from the Focus exhibition, dreaming sweetly about the coming weekend in sunny Malta, I was shocked into reality with all the joys of a defibrillator by the dulcet tones of 'Scotland the Brave' emanating from my mobile phone. Struggling to fumble for my glasses to silence the offending beast, I was greeted by the effervescent Kevin Casha, FSWPP & FMIPP, and President of the Maltese Institute of Professional Photographers.... "Martin, where the hell are you? It's Kevin, I'm at the airport and it's nearly two in the morning...Oh my God! I'm supposed to be picking you up tomorrow! Did I wake you?" This was clearly going to be a stunning and eventful weekend!

On time and on schedule, I headed off to Manchester airport ably chauffeured by my friend and colleague, Damian McGillicuddy, through hail, sleet and snow to meet our distinguished editor and Photoshop guru, Mike McNamee with his charming wife Jill, in tow, laden with bags, cameras, laptops and all sorts of technical dooberrys (you can see I'm well up with terminology) for our spring training programme. Three busy days involving a calibration visit to the largest photolab on the island, Agfa Lab in Floriana, a suburb of Valetta, a full day presentation by Mike on just about everything digital including calibration, colour spaces and the great image capture debate, and finally an interactive handson photoshoot in the famous 'Silent City' of M'dina, Malta's ancient capital. Not much really, just a quiet weekend jolly!

We eventually landed at Malta International Airport after a half-hour delay at Manchester while we waited for someone's sandwiches to turn up, at around 1.30 in the morning. Greeted by Kevin Casha and a few of his Executive, grinning from ear to ear after the previous night's phone antics, we clambered drowsily into the cars and headed off for an apartment in Sliema.

The following morning, rested and refreshed, we opened the shutters to see a glorious blue sky heralding our arrival. The door phone rang at just after 9 am as the MIPP's Chief Executive, the ever-smiling Stephen Bussutil, accompanied by fellow committee member, Charles Calleja, had arrived to take us on a whistle-stop tour of the island's coast in the hunt for suitable locations for the Maltese Institute's 10th Anniversary celebration seminar programme, to be held in early November (more about that later). Centuries of history embodied in spectacular buildings, sleepy villages and picturesque fishing ports with almost unpronounceable names, Marsa'Xlokk as an example, added to the magic of the morning.