Maz Mashru honoured at the Commons - part 1 of 1 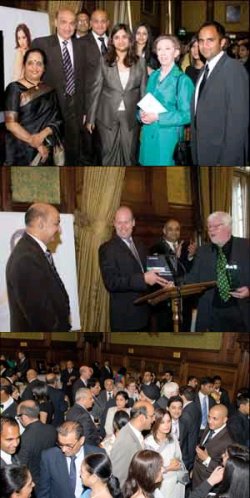 At a recent, very glitzy event, SWPP Portrait Photographer of the Year, Maz Mashru was awarded his prize by FujiFilm's Business Group Manager, Jon Cohen, and SWPP CEO, Phil Jones. The event was held in the members' lounge of the Houses of Parliament and was hosted by Leicester MP, the Rt. Hon. Keith Vaz, with the Rt. Hon. Margaret Beckett, MP as the guest of honour. It was a fitting tribute for Maz's achievement, after heading up an entry of more than 3,000 images.

Over 250 guests included many of his friends, colleagues and members of the photographic trade who were able to view a display of Maz's work, including the image of Prime Minister, Gordon Brown which was presented to the Deputy Chief Whip, the Rt. Hon. Nick Brown. 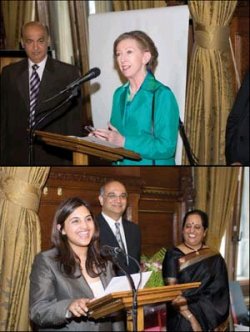 Our gracious host, Keith Vaz, gave a sincere testimony to Maz's success in the industry, which has spanned many years. He enlightened the audience of the long and sometimes difficult road that this multi-talented and award-winning photographer has trod. However, it was left to Maz's daughter, Rita, to provide the most moving sentiments, as only a much-loved daughter can. Rita has worked closely within the Leicester-based studio, running the business side, in order to let 'Dad' concentrate on the creative side.

Following the reception, the group was privileged to be invited into the House of Commons itself to see at first hand where our politicians do their work. Keith Vaz entertained the audience with a concise and witty introduction to the working life of the Commons. Following this the group moved to The House of Lords for a comprehensive over-view of life in the Lords.

All in all it was a spectacular occasion for a truly remarkable photographer, who richly deserved the acknowledgement for his personal achievements.