Why mounting is important for photographers - part 1 of 1 2

There are a number of reasons why we mount images. However, essentially, it all boils down to the one aspect of being able to present an image in its best possible light. Wouldn't you want to show off the quality of your image, to add perceived value as well as monetary value? What about protecting your work so that it remains as you intended it to be, an eternal moment, a timeless message?

"My images don't need a mount; it's only competition that forces me to mount my work; I haven't the time, nor the interest".

These thoughts are common, and understandable, as with the idea of mounting comes extra costs. So what is all the fuss about? 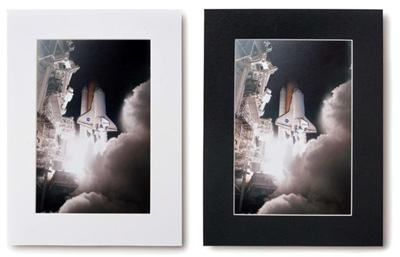 If you were to look at an image, excellent in its own right, there is always room for improvement. What better way than to merely add the trimmings? You don't need to change your image, just enhance what is already there. How does a mount do that?‛ I hear you say. Well, there are a number of options:

These are but a few varieties of mounts which can be played with to suit your image. A simple difference between the white mount and the black mount surrounding Discovery (Andy Miller) can be seen from the two images here. In this case, black helps the light to explode and catch the audience's attention, whereas white almost makes the light spread out too much, ironically leaving it less bright than with the black. The audience perceives the Rocket behind the black mount to be of greater'wow' factor; it grabs their attention. The white version almost devalues the image and doesn't give it the credit it deserves.