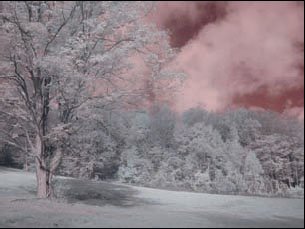 Digital infrared cameras are sensitive to all ranges of the electromagnetic spectrum that have not been blocked through filters. All professional-quality digital cameras have what is called a hot mirror filter installed in front of the camera's sensor. Depending on this filter's strength and efficiency, it usually blocks much or all of the electromagnetic spectrum shorter than 400 nanometers and longer than 700 nanometers.

The wavelengths shorter than 400 nanometers are the ultraviolet range and are not needed or wanted in infrared photography. The wavelengths longer than 700 nanometers, however, are the near infrared range and the range in which infrared photographers want to record. Some early digital cameras did not have strong hot mirror filters and thus were able to record into the infrared range. Just like with infrared film, it is important to filter out much, if not all, of the visible spectrum so those wavelengths of light do not overpower the image.

We began digital infrared photography with the Nikon Coolpix 950 camera because it has a relatively weak hot mirror filter. Because of this, black and white infrared photography is possible. With a number 25 filter in front of the camera lens, you get an infrared look that is very much like using the Konica infrared film.

However, the shutter speeds were somewhat slow. With an 87 opaque filter, you can achieve a look that resembles Kodak infrared film, but the camera must be placed on a tripod to compensate for the very long shutter speeds. I had the hot mirror filters removed from our Coolpix 950 cameras and the results improved greatly. Now, with a number 25 filter, I achieved results that were similar to the Kodak film that I had always used and loved.

In addition, my shutter speeds were able to be increased just like with Kodak infrared film. To me, this is the only way that makes sense for digital infrared. I have since sold my Coolpix 950 cameras and have replaced them with Coolpix 990 cameras for their larger file size.