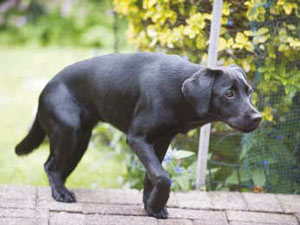 Although Himself has re-appeared after another stay in hospital,he has returned with a dreadful limp. Treacle says he is puttingit on. However, we have had lots of visitors bearing cards andboxes of goodies, although nothing has come my way. I had asniff at the limpy leg; it smells of blood and fresh meat so I jumped onand got a right bollocking. Fudge and Treacle have not been seen formore than a week, they have been declared too boisterous around limpylegs.

Himself and Herself are in separate bedrooms at the moment which is abit confusing as I am unsure where to concentrate my morning attacksin the quest of breakfast. Himself's bed looks a bit odd as there is a bigcage over the limpy leg, I'm sure he's got another dog under the covers,there's plenty of room for a Labrador or even two under it. More recentlyI have managed to get Himself up first thing, although he groans a lotgoing down the stairs. I have even managed the old 'get a breakfastfrom each of them' trick although they have secret signals now so theyknow.

Walks with Himself have ceased altogether; I heard him on the phonesaying he can only managed 25 yards which is hardly much for a youngLabrador. If they had kept the Tagalong, Herself could have taken himalong the prom in that; as it is, he sits in the car reading the newspaper.Apparently the Humans have won a charity raffle and the prize is a day'straining with a professional police-dog handler. I intend to act as thickas possible as that should get me more treats. I am also finding that I amgoing deaf as the day approaches. I may even cultivate a bit of a limp, itseems to bring chocolates and biscuits raining down from the skies.