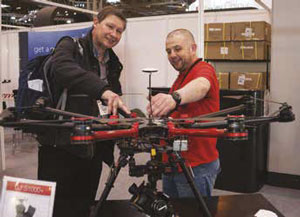 Paul McMullin eyes up a heavy lifter drone but on a more practical level a case for his DJI Inspire!

The Photography Show continues to expand, moving into the larger Hall 5 for 2015. The increased space was partly exploited by the widening of the aisles which made for a more pleasant experience, especially on the day we visited - Monday was , by all accounts, the most frantic. The Societies were present for the duration. The overall flavour has changed a little from Focus on Imaging it could be summarised by 'more cameras, less albums' although book-making companies such as Blurb, Bobs Books and Cewe were much in evidence.

Each year the various trade shows seem to have a stand-out theme. This year it was drones, they were buzzing about everywhere, in some cases literally, although they were more like caged birds for this activity! Eight stands listed drones as a headline product. While there were some heavy lifters there (capable of getting full-size DSLR airborne) the DJI Inspire caught the eye. Despite the dreadful customer service they do seem to be thriving (the two things being related?). We will be featuring a full review in due course as we have one to play with (and a pilot's qualification on the way for one of our writers).

The effect of 4K video was in evidence with plenty of stabilisers and linear motion tracks on display. This too is a topic we will be returning to as Paul McMullin takes delivery of his CameraTrax unit this week. Time lapse is coming of age with better cameras, better hardware and screen to match 4k.

We took a close look around the Colour Confidence stand and their expanding range of products. DxO had a significant presence, Frank Doorhof was giving it large on their stage while we were there. We also brought ourselves up to date on the monitor scene. The EIZO ColorEdge CG248 with a UHD (ultra-high-definition) 4K (3840 x 2160) native resolution has been created for creative professionals who work with high-resolution content such as photography, print and video. It features the highest pixel density yet in the ColorEdge line-up at 185 ppi (pixels per inch), making high-resolution image display smoother than ever. This allows the display of the high level of detail captured in 4K photographs with exceptional clarity. It comes with a built-in sensor to enable self-calibration. ColorNavigator 6 comes bundled with the monitor. The ColorEdge CG248-4K uses an LEDbacklit IPS (in-plane switching) LCD panel with a wide colour gamut that covers 99% of the Adobe RGB colour space and, in addition it warms up in seconds rather that the usual time of many minutes for this class of monitor.