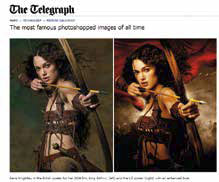 The Best of the Worst

The Telegraph gathered together their version of the worst 25 photoshopped images of all time. Some of the examples were appalling, real beginner's stuff. Others were more obscure and, as presented, some of their evidence was not self-consistent. One pair of images purported to show Angela Merkel had been photoshopped out of the front line of the Charlie Hebdo march in Paris. The trouble was that the pair of images were not shot at the same time and Merkel could well have arrived a moment later
for all we know.

Others were blindingly obvious, such as a car added to a busy highway to show congestion - except that it was pointing the wrong way to all the other traffic! Some were just plain crass, such as the Christmas card from the Spanish Royal Family in which Queen Sofia has been hacked out and plonked on the sofa with the rest of her grandchildren.

Yet others signal troubled waters ahead; Keira Knightly appears on the 2004 poster for King Arthur with slightly plumped up breasts (well quite a lot really). She answered this outrage only recently by posing in the nude, petit breasts and all, and looked none the worse for it either.

My own favourite is missing. It was a Polish advert modified from the American version by substituting a white person for a black person. The mistake they made was in not changing the hands as well! The Sunday Sport image of the Lancaster bomber crashed on the surface of the moon comes a close second. Oh Thomas Knoll just look what you started! 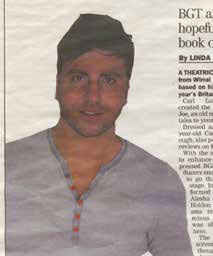 There is still work to be done 25 years down the line. This is a cut-out from the local rag. Scissors would have been a better option!