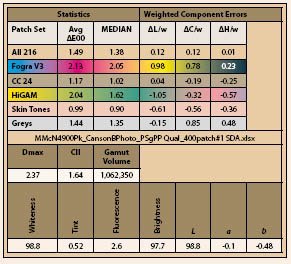 We first tested Canson products as a group back in June 2009 (surprising in some ways as the mill has been going for more than 450 years!) At the time we were struck by the fact that the entire range was OBA free and it delivered good statistics. The Baryta Photographique was not in that test set, and it was in June 2010 that we first tested it, alongside three other 'baryta' offerings from Fotospeed. Here it stood out as a top-class performer delivering good statistics off an Epson 3800. We also did quite a bit of monochrome testing as part of the feature.

And so we move to June 2012 and the need for a very neutral test medium to complete our toning tests as described in the previous pages. We had retained the remnant of the box of Photographique (there - we knew hoarding the stuff would eventually pay dividends!) and it seemed the obvious candidate.

Since these initial tests the Canson range has been adopted into the media set allowed for Epson Digigraphie use and, at our end we have moved up from the Epson 3800 (UltraChrome ink) to the Epson 4900 (Epson UltraChrome Vivid Magenta HDR ink).

It was necessary to profile the Photographique so as to set our baseline for tests but the results were so spectacular that we decided to give the media its own place in the sun - so here it is, basking in the warmth! We are not the only people to like it, incidentally, it won the TIPA award for Best Fine Art Inkjet paper in 2010.

The finish is a very flat satin and the appearance is a little creamy despite its almost perfect neutrality. In terms of measurements it delivers high whiteness with a Lab luminance of 102.5% even though there is no trace at all of any OBA activity. The colour coordinates are a= 0.13 and b= -0.3 (at D50), that is within 3⁄10 of spectrally neutral. The values differ only by about 1⁄10 of a point between D75 illuminant and Tungsten A, indeed at D75 the a/b values are actually zero.

A feature of papers that we do not normally comment on is the smell. Photographique actually smells like an oldfashioned fibre base silver halide paper! 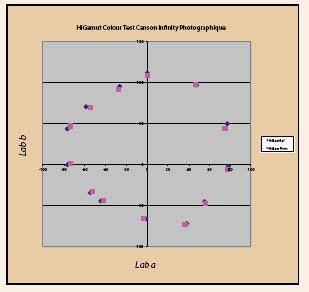 We made a bespoke profile using i1 Publish and 400-patch target (at D50 for the record). On the Epson 4900 we used Pk ink, Premium Semigloss Photo Paper as the media setting and 1,440dpi. The 400 is smaller than our usual patch count but we had by this time only a single sheet of paper left and we used half for the profile, and half for the audit.

The colour data are assembled in the table. As far as we can find in our records they have never been bettered. They continue the long line of accurate, baryta-based media results. The generic characteristic of these papers is high overall accuracy and in particular, accurate skin tone sets.

This latest test has reinforced this trend but the new HiGAM patch set has been reproduced with great accuracy and the gamut has been expanded by almost 20%. The latter is down to the HDR ink set with its additional green and orange inks but even so it is the job of the paper to preserve these improvements out into real prints.

Looking back through our database of almost 200 barytabased tests they are, with the exception of just two, less than 3.0ΔE00. Only twice before though have we got inside 2.0ΔE00 one for the previous record of 1.6ΔE00 and, by coincidence in the Innova test which follows. This record is now lowered to 1.49ΔE00 with this latest test.