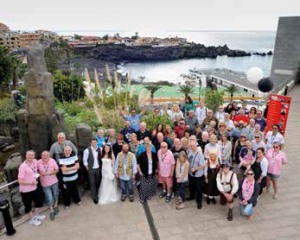 The 28th annual Photo Training Overseas event was held in Tenerife from 30 January - 6 February 2015 at the delightful Be Live Playa La Arena Hotel in Puerto Santiago, almost 90 people attended; the group was made up of delegates, sponsors, tutors, models and a small management team.

The organisers, George and Glenys Dawber arrived ahead of the main group, who were departing from a bleak UK from five different airports and were greeted on their arrival by the hosts. Once rooms had been allocated those who were attending their first ever PTO event - and there were plenty this year - attended a 'First Timers' meeting to be welcomed and presented with a programme of events for the week of training; this clearly helps people to bond quickly and feel a part of this phenomena called PTO. This was followed by a welcome meeting for all, where speakers, sponsors, models and management team are introduced. After dinner, most congregate to the bar where once again friendships are formed.

The following morning after a day of travel and settling in, the entire group come together, first to hear from the Tour Operator about what they can do in their spare time - reading the intense programme, it was clearly only directed towards partners and spouses, as most delegates want to take in as much training as possible during their week and believe me that was in abundance!

FRANK DOORHOF from the Netherlands treated delegates to his way of seeing things and executing them with panache. Then we had DAVE WALL a man of many talents and incredible stamina introducing the popular concept of shooting your images to submit to a stock library. Dave personally specialises in book covers. The master of Photoshop GLYN DEWIS delighted delegates with his own inimitable style of working methods - Glyn has been invited back for next year to continue taking the mystique out of the clever use of Photoshop and show just what can be achieved with a little practise and knowledge. For the wedding enthusiasts there was JULIE OSWIN and MARK SEYMOUR, two entirely different approaches to the business of wedding photography; Julie demonstrating classical work and Mark a definite documentary style in black and white. SANDI FRIEND is a working mum/photographer, and we know how many females operate in this way, Sandi gains most of her commissions from publishers of fashion magazines and brought a refreshing input into child portraiture.

A legend of the industry, JERRY COE intrigued delegates with his 'Pencil Portrait' technique and his new iPhone imagery, both of which have gained him Fellowships. PTO threw in a wild card this time, a photographer some of the group met on a market in Fuerteventura during PTO 2014, he was selling superb images of landscapes, seascapes and fine art and attracting a lot of attention, he was clearly a talent, self taught and was at first reluctant to consider being a speaker on PTO, he felt it was too daunting, however, the persuasive skills of the organisers arranged for him to travel to Tenerife. BRIAN MCLERNON proved not only to have the gift of the Irish gab but to be a winner in every way, his engaging persona and unlimited knowledge of his subject made him probably the most popular tutor in the group, so you never know what to expect on a PTO!