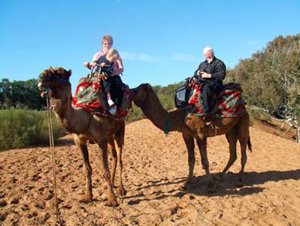 is all about having fun and learning, but try telling that the the second camel, who seems to prefer the smell of his pal's crevices!

For 2007 the venue was the Moroccan beach resort of Agadir - acres of golden sand, a heated outdoor pool and even some warm sunshine. The conference hotel also offered a large garden, thoroughly edible food and, for most delegates, the added bonus of an all-inclusive deal: eat, drink and be merry any time up until 11pm. Followed by a pay bar facility until 3.00 in the morning!

But of course, we weren't just there to chat to old friends and have a good time. There were workshops to attend, competitions to enter and evening seminars to enjoy. Mind you, interaction between people is important too - as Steve Howdle observed in his lighting workshop, "Photography can be a lonely business, you need people to bounce ideas off." As usual, PTO offered plenty of ideas, especially in the eight well-attended workshops led by specialist photographers.

"I'm impressed by all the speakers," commented first-time delegate Janet Buckley from Torquay, "I want to take advantage of it all - the new ideas, seeing what other people do - then I want to put it into practice in our wedding business."

So let's take a look at the kind of inspiration and wealth of ideas Janet will have picked up from the workshops. Certainly in her own field of weddings, there was plenty to learn. First off came maverick Kiwi, Ross Grieve, now based in Wales, full of energy, imagination and the kind of can-do attitude they take for granted down under. 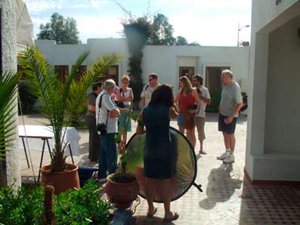 Later in the week, came a different take on weddings from that dynamic duo Damien and Julie Lovegrove. Husband and wife teams seem to prosper in the wedding market. Through diligent planning, attention to detail and quality standards, the Lovegroves have certainly created an enviable business.

But it doesn't stop there. Even though, at a rough guess, the majority of PTO delegates probably earn the majority of their income from wedding work, there were plenty of inspiring ideas and techniques to pick up from the nonwedding workshop lecturers - especially since most wedding practitioners also take portraits and even the odd commercial job.

Sometimes the application was direct as with Sandi Friend's charmingly natural and playful approach to outdoor child photography. At other times the relevance was less obvious.

For example, Steve Howdle was almost certainly the only person at PTO who makes a living from hair photography. Yet his workshop on studio lighting was a masterly introduction to simple and complex lighting techniques - practical, down to earth and applicable to almost any type of people photography.

Then of course there was Photoshop - seemingly the dominant software of the age of digital imaging. Described by one delegate as 'a bit like the Old Testament,' it's so vast and complicated that few practitioners use more than a small part of it. As a result, no two photographers use it in quite the same way so it was interesting to see the different applications our specialist lecturers found for this versatile programme.

This year PTO's resident 'Photoshop guru' was college lecturer Ray Spence. In fact Ray spent 30 years shooting on film and printing fine art monochrome images. He now feels that digital quality has 'come of age' sufficiently to make it possible to replicate accurately most of the fine art printing techniques which evolved during the first 150 years of photography.