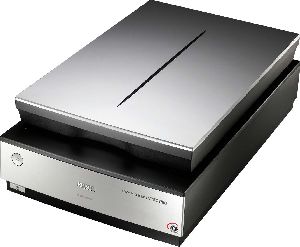 The demise of film has led to a decline in sales of scanners for all but historical images and those who refuse, for one reason or another, to shift from film, but need to output digitally. Our own Paul Gallagher is a case in point, preferring still, the wide and controllable dynamic range of monochrome film, developed in particular ways, along with the creative flexibility of camera movements and control on a field camera without the need for electrical power.

Scanners have never been cheaper and never had such high quality and for certain jobs they remain indispensable. The reproduction of certain types of artwork for example, is more quickly accomplished with a scanner, rather than setting up lights and an easel for camera reproduction. While a camera does a better job, pixel for pixel, than a scanner, when reproducing direct scans without an intermediate transparency, the only downside of a scanner is the nature of the light source - if your artwork is metameric to the fluorescent tube of the scanner, you might be in trouble.

The Epson Perfection V750 Pro represents a breed of scanner that has been developed to satisfy the rather mixed environment that we operate in today. With supreme accuracy in both reflective and transmission modes it can cope with large format negatives and transparencies at a resolution that used to be provided only with expensive, dedicated film scanners. The quality of many of those was also pretty dodgy as any user of the Minolta medium-format scanner will testify - how long ago it now seems, with those SCSII cables, as thick as a snake, and temperamental drivers that would hang a system as quick as you could say 'preview'.

The V750 is an A4 flatbed scanner with a built-in top transparency hood. It operates at up to 6400ppi (transparency) and 4800ppi (reflective) with a Dmax of 4.0 - impressive figures and as high as anybody would realistically wish to venture. We found that even our massive workstation would not cope with the amount of data generated by the scanner if we tried more than 2400ppi on a 6x6 format. Bear in mind that 6x6 at 2400 is a 77MB, 8-bit RGB file, which would scale to a 26" print without interpolation. Along with the dual optics and improved coating, the V750 is bundled with SilverFast, Photoshop Elements, Monaco EZcolour (with both 7x5 reflective and 5x4 transparency targets) and comes with film holders for the following formats: 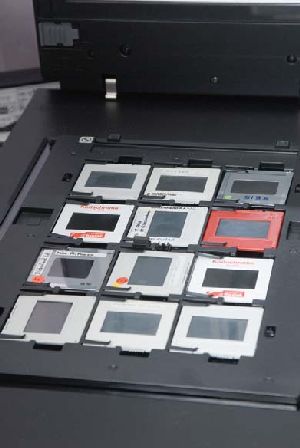 Digital ICE is also provided, in many ways a vital ingredient if your desire is to archive or recover elderly film images. Although it slows the scanning down, as you will see later, it does a tasty job of creating a clean scan.

The platen surface is placed about 2.5mm below the bezel edge of the unit, which is 30mm wide down the sides and about 110mm at the end away from the lid hinge. Making multiple scans of delicate artwork is thus possible with care, though not recommended for high-value artwork.

This then is a comprehensive box-full of kit to cover any eventuality except auto-cassette-driven scanning. At a cost of £550 (RRP, deals are available) it represents a significantly reduced investment compared with a dedicated film scanner (eg around £2,000 for a Nikon medium-format or £500 for a dedicated 35mm scanner).

Scanners have become both better and faster and the V750 is no exception. The timings were as follows:

Warm up from cold - 38s. We found in practice that the lamp continued to warm up and became more even over the area of the scan after a couple of minutes warm up. Once the scanner is working the lamp stays lit up and seemed to be more consistent; we would certainly recommend giving it 5 minutes before critical work or profiling.

Overall then the system is reasonably quick, but quite some way behind say the modern Imacons. In the parallel tests conducted for Paul Gallagher in this issue, the Imacon V5 at Calumet scanned a 67MB greyscale image in under 30 seconds. Bearing in mind that Calumet charge their digital suite at £30/hr, the speed benefit is significant - you can do a lot of 30sscans in an hour. Paul McMullin's 9-year old Imacon took around 5 minutes to perform the same scan, which shows how the technology has come on.