Sun, Sea, Sangria and a massive hangover of outstanding training - part 1 of 1 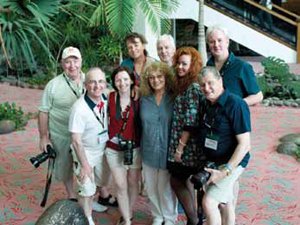 The 26th annual PTO training course headed off to the beautiful Canary Island of Lanzarote at the end of January, away from the inclement weather prevalent in the UK at the time. A warm welcome was evident upon arrival as Arrecife airport was bathed in sunshine and a lovely temperature of 20°C therefore the mood in the group was good from the start.

Upon arrival at the Hotel Beatriz - a large impressive-looking four-star hotel standing majestically alone on a hill which could be seen from anywhere in the resort of Costa Teguise - the group were welcomed by the organisers, George and Glenys Dawber, who had flown out a few days prior to the group's arrival to ensure final details were in place - this was followed by a swift and efficient check-in procedure in a most impressive reception with long hanging plants dropping down from a very high ceiling. There were also trees and a stream running through many areas.

The newcomers in the group had a 'first timers' meeting when anyone who has not previously attended a PTO - and this year there were in fact a larger than usual number of new recruits, (thankfully, as delegate numbers were down on previous years) - they were quickly made welcome and introduced to each other - a nice touch which clearly goes down well as an ice breaker for those involved. A special feature of a PTO is the rapid integration of the group in a friendly family-type, convivial atmosphere. The tutors, models and sponsor representatives are then called together for an in-depth briefing by the organisers, followed by a sumptuous selection of varied food in the dining area with entertainment available afterwards or - as was a popular feature - networking around the all-inclusive bar.

The following morning the group eagerly assembled in the mainconference room for a Tour Operator briefing followed by a welcomefrom the PTO hosts, which included a look back over the previous year'sevent; this in turn was followed by tutors' introductions. The afternoonMaster Classes of two hours' duration then kicked off and the scene wasset for yet another fantastic week of learning and camaraderie, there was an obvious 'buzz' in the air as David Stanbury, an exciting and very talented wedding photographer from Wigan, led his model bride and groom off with his delegate group. Faye Yerbury with her attractiveand engaging boudoir model worked indoors; Su Kaye with her group learning the finer points of family portraits without the need for flash lighting and Marc Huntington, a sports photographer, who majored on how to use lighting correctly for his high-speed sports photography work. 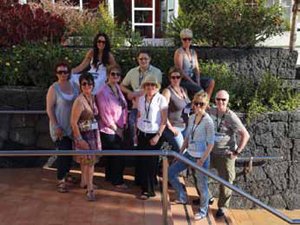 The evening had a full house at the Photo Competition critique where 30 finalists had already been chosen by tutor/judges back in the UK before the party left these shores. However, all submissions - well over 150 - received a critique from the tutor/judges. That night a display of the finalists' prints beautifully printed and presented by One Vision Imaging became a focus point for the group and during each ensuing day. The judges met to choose the winners and runners-up in three categories:Portrait, Wedding and Open, with an overall winning image selected from the three winners as the PTO Photographer of the Year, all receivingmagnificent trophies kindly sponsored by SWPP of The Societies plusvaluable discount vouchers off One Vision Imaging and of course the admiration of the entire group.

The following day the Master Class groups continued morning and afternoon, with an interesting evening presentation by Tim Collins, an Irish photographer now resident in Nottingham bestowing the virtues of SLR video, then off to the bar and/or dining-room for more networking. The 'buzz' was clearly building and the all-inclusive drink was energising minds!

Another day of Master Classes from the first set of tutors, ably assisted by two great ambassadors of The Flash Centre in Simon Burfoot and Brian Collier, we then met the second set of four tutors for their sessions. Nicola Selby with her exceptional dance model; Stuart Bebb an awardwinning wedding photographer; Trevor Yerbury with his fine art nude model and the exciting new talent of Richard P. Walton with his off-thewall thewall

urban images. There was an evening with a legend of the industry Mr Bill Bowman of Panorama fame and a popular session on another evening with business-building ideas presented by four delegates as Ten Minute Tantaliser slots.

The culmination of the week was the glittering Gala Awards Dinner held on the final night; presentations were made to all the hard-working and genuinely sharing tutors, the exceptional models, the helpers. The winner of the Epson Printer for the best Photo Art Image was Helen Spiegl, the Fuji camera for the winner of the PTO PR Competition went to Alan Clarke. There was a charity tombola boasting a vast array of attractive prizes including an Elinchrom lighting kit, an Epson printer, an all-convention pass to the Societies London Convention, a holiday for two in Lanzarote, discount vouchers off next year's PTO, many beautiful watches, perfumes and gifts galore offering a one in three chance of a handsome prize. Dinner was served and although the food selection throughout the week had been generous, the Gala Meal was sumptuous and exceeded all expectations. At the end the PTO bride model, a former X Factor boot camp finalist, surprised us all with her fantastic singing abilities and she soon had the whole room rocking!

It is often reported that PTO is a boozy excuse for just fun in the sun - well that cannot be further from the truth. The rest of what happens during a PTO week is far more than that. It is what you make it and judging by the comments, both during and immediately after the event, this was the best one ever! Which, we are delighted to report, as organisers we hear that each year, so I guess we must be doing something right!

Next year, 25 January 2014, PTO will visit the sophisticated Canary Island of Fuerteventura, based at the Hotel Elba Sara with yet another fantastic tutor line-up. If you want to experience this life-changing event then we suggest you book early to avoid disappointment.