There has been a lot of discussion in the papers on the change in the tax rates, and the removal of the 10% tax rate. I am self employed with profits of £15,000 per annum with no other sources of income, how will these changes effect me? - part 1 of 1 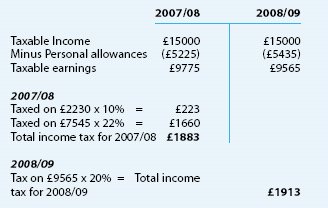 Budget changes from April 2008 mean the abolition of the starting rate of 10% for earnings and pensions and instead the first rate of tax will be 20%. This 20% rate is the new basic rate reduced down from 22%. While this does mean that some individuals will gain, others at the lower end of the earning scale will lose. In order to benefit from the reduction in the basic rate band from 22% to 20% an individual will need to have income of more than £16585 pa

Income tax comparison for an individual aged below 65 years earning

As you can see, although personal tax allowances have gone up, those individuals with earnings of less than £15,000 will be worse off using the new rates. Compare that to those with higher earnings as shown below: 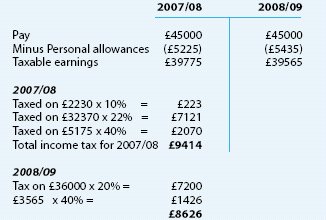 Income tax comparison for an individual with self employed earnings of £45000 pa:

As you can see from the two examples above those with higher self employed earnings will see a reduction in the tax they pay, compared to those with lower income whom will see an increase in their annual tax bill. Even after factoring changes in the national insurance thresholds an individual with self employed income of £15,000 will pay an EXTRA £18.40 per year compared to someone with earnings of £45,000 who will pay £436 LESS tax per year.

These figures are based on the new tax rates which came in to force at 6 April 2008 and do not reflect any changes to the tax credits or child benefits systems.

Have you got a topic or general tax question you want us to cover in the next Q & A issue? Then email mikep@twdaccounts.co.uk