This cute little gizmo was brought to the attention of your Editor by article co-author, Ian Stewart. As with so many things, the simple ideas are the best. This is a light modifier, which attaches to your hammerhead or cobra-head flash gun to broaden and soften the light for both fill-in flash and main-source flash work. Such is the construction that it can also double as a lens protector or a macro light tent (although its predecessor was a better light tent for small-scale work).

Construction There are a number of models, each of which is specific to a particular flashgun. The construction is a semitransparent, moulded neoprene, 4 half" in diameter and 4" high. It is quite flexible (think neoprene plastic tubing) and fits and holds (by friction) to the front aperture of the flash tube. The test model required quite a bit of tugging to pull it over the gun-head. It is only a couple of ounces in weight.

The unit may be used open or capped off with the new, inverted dome (LS2PJD), which is made from a translucent polypropylene. This cap replaces the original, which protruded from the cylindrical portion and, apparently, sometimes caused flare, because it was too far forward.

On Test The unit was tested on a Vivitar 283 cobra-shaped gun powered by a 6v/6Ah waist pack, delivering flashes to within 1/10th of a stop on successive pops. For realism we measured the output in a 15' x15' x 8' 6" bedroom with a white emulsion ceiling, shooting at a range of 3.6 metres at 200ISO and measuring the light on a well-calibrated Gossen Mastersix flash meter. Such a set-up would be typical of pre-wedding bride'shome shot. It enabled us to measure a realistic guide number for the gun-diffuser combinatio 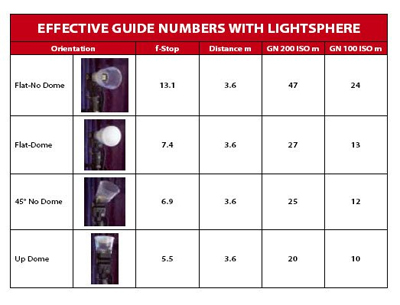 In practical terms, shooting at 3.6m (11ft) and 200ISO gave a working stop between f5.6 and f11½ on full gunpower, ie more than enough. The laws of physics demand that you lose quite a bit of directed light energy as soon as you diffuse the beam. We found that fitting the inverted dome reduced the nominal guide number from 24 (ISO 100 in metres) to between 10 and 13 depending upon the orientation. Using the gun and the Lightsphere gave an aperture of f8 at 10 to 11ft at 200ISO, quite a workable light level for flash-only illumination.

For fill flash outdoors, assuming your flash was to be set for half the ambient light level, would give you around f8 (ie assuming about 1-stop loss due to the absence of a ceiling). The inverted dome warmed the colour by about 800°K. This would not be a problem if you either bespoke white balanced the flash or were in a RAW file workflow. Others may take the view that the 800°K shift is desirable anyway! Ian Stewart kindly provided some examples of shots taken using the Lightsphere both singly and in a threesome. The quality of light produced by the unit is difficult to quantify but it certainly spreads the light quite evenly.

The three-up use on the large family group is particularly impressive for such a lightweight and compact lighting set-up. The shot was made with a Canon 580 as the master and a 550EX and 430EX as slaves, all using a Lightsphere. The master was pointed up at 45° and the slaves were pointed vertically. Exposure was 1/60 at f5.6 on a Canon EOS 1D MkII at 17mm focal length and 400ISO. There was a white celing at about 20ft height.

In the second example, of a bridal group, a single Canon 580 flash was used on the Stroboframe (see below). Exposure conditions were 1/80 at f3.2, 28mm focal length and ISO500 on the Canon 1Ds MkII. Note the good balance between

the external daylight and the interior - you can also see the Lightsphere in the window as a reflection (above the bride's head). 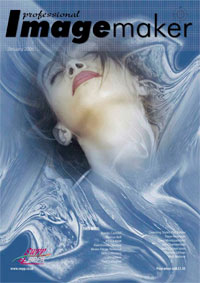