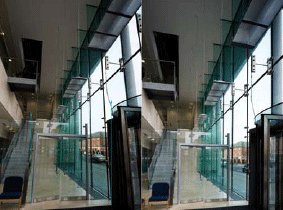 Initial lens test shots (not for client use!), the interior of the new School of Tropical Medicine for the University of Liverpool. Note the correction of the verticals by the use of lens shift.

We are constantly bombarded with discussions on the relative merits of film versus digital and vice versa. This debate has been ongoing since the arrival of the Sony Mavica (guess when and then look at the bottom of the page*), replete with 700Kb floppy discs. At the time the Mavica was used for those jobs it was good at and it still lives on today - a surveyor arrived at McNamee mansions last year and used one during his survey for our solar heating, to record the inside of our loft space.

Since those days the digital camera has gradually made inroads into the scene, taking more and more sophisticated roles along the way. It started with surveyors (typified by the Nikon Coolpix 950) but has now progressed through small product shots, to A4 pages, to front covers of flashy magazines and double page spread of high-quality, lifestyle magazines. One of the last outposts for 5x4 film has been the technical camera for use in architectural photography. This too has started to yield to the onslaught and we spoke to specialist Paul McMullin about this recent (and ongoing) transfer to a fully digital workflow. 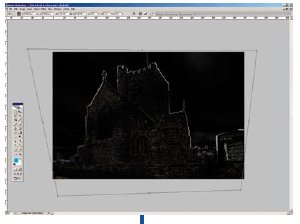 Photoshop has been used to corrrect the perspective of the image. Despite the rather heavy amount of distortion of the image (as shown on the right) the detail has survived quite well. The shift lens, however, just makes a slightly better job.

Things came to head during Paul's recent shoot for The Architectural Review. Initially they had insisted on the use of 5x4, their editorial policy demands that the building are plumb and true, with no converging verticals. The availability of a true wide-angle shift lens had frustrated Paul's use of his Nikon D2x but, in the background, things have also been getting progressively worse for film. At one time you could have E6 processed in many places, even our local hospital trust offered the service to local photographers. This gradually diminished, starting with E6 lines running only on selected days of the week, then being decommissioned and congregated only in the larger city centres. Eventually Liverpool lost all E6 lines and Paul was having to travel to Manchester, or courier his work there, for processing. Then the last outpost in Manchester closed (and by coincidence the E6 line came back to Liverpool). While all this was going on, magazines such as BJP were filing reports almost weekly on the labs going out of business or retracting services.

The crunch came when Paul had paid out almost £500 on film and processing. Atlthough the 5x4 was up to the usual high standards of this format The Architectural Review selected just one and for the remainder purely digital. The £500 did not even take into account the time and energy spent travelling with films or the considerable time it takes to prepare a high-quality scan on his Imacon. We hear so much about the time photographers spend on their digital workflow, forgetting that to prepare a 5x4 scan takes lots of care and quite a lot of painstaking dust removal as post-scanning work.