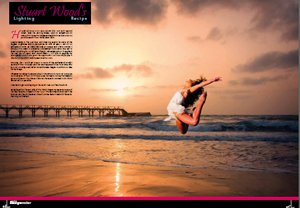 Hi and welcome to my new column that I am really excited about. Over the coming issues I plan to concentrate on some of my favourite images and explain in as clear a way as possible exactly how I have taken them.

Despite being at 'the coal face' and shooting people for some of the biggest magazines and TV companies for over 20 years, I am still as enthusiastic today as I ever was and at George and Glenys Dawber's fabulous PTO week in Lanzarote, I deliberately took some time out to shoot something for myself. Even though I adore being busy throughout the year for my many and varied clients, I still love to explore my photography and if I am given the opportunity, I will not simply play it safe, but will push my technique as much as I can.

Knowing that I could get access to some of the professional models outside of the PTO classes and that one happened to be Paris Parle, who is a truly amazing Royal Ballet trained dancer, I began to work on an idea for my image.

Whoever my subject happens to be, it is important to me to try to capture some 'essence' of them. With this picture I wanted to convey the freedom, grace and beauty that dancers like Paris have and I wanted to do this as dramatically as possible. 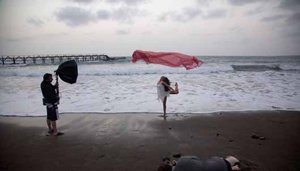 I decided to get Paris leaping at the newly risen sun like a free bird!

Being based on the east side of the island I began my reconnaissance of the local beaches, armed with my trusty iPhone compass. Eventually the location was found, the exact time of sunrise determined and the earlymorning taxi booked.

I cannot stress enough how much effort was invested at the planning stage. I remember many years ago being told by a visiting London photographer while I was a student at Salisbury College, that to elevate my photography an extra 5%, which can mean the difference between 'good' and 'special' will take an extra 90% effort. Over the years I now know exactly what he meant and everyone noticed how quiet and focused I was travelling to the beach in the morning.

The spot was chosen and the equipment prepared as the eastern sky was paling to the dawn. I chose my 24-70 f2.8 lens as I wanted Paris within the seascape and as I wanted her frozen in mid flight, we had packed the Elinchrom Quadra location flash. I decided to go with one flash head only to which was attached the Rotolux Deep Octa soft box which channels the light crisply and directly. This would lessen the overall light spill and focus it more on Paris, while at the same time avoiding the foreground beach nearest the light source on the left of frame from being unnecessarily lit and rendered unnaturally bright.

I then (think it's called suffering for your art!) stripped to my shorts and T-shirt and lay in the cold wet sand! During the course of the shoot I did get absolutely soaked by a few stray waves and eventually simply lay there lifting my camera 'Excalibur like' from the waves!