Wider in media and wider in gamut was the theme at a recent press launch by Epson. With an inspired choice of venue, the Life Room at the Royal Academy of Art, they presented their new ink set along with a complete new set of printers. The only thing that did not get any bigger was the printing time, the new system has been equipped with quite a substantial speed hike, along with even finer detail.

The heart of the new machines is an improved ink head with a reduced nozzle pitching but with a retained ability to both fire and control droplets (see the next spread). This gives an increase in the detail without compromising speed, indeed the speed is up by a factor of 1.6 times on the higher resolution end of things. All this new droplet technology is called Auto Ink Droplet Detection System and is watched over by an electrostatic detector, which will do a nozzle check in a few seconds using a minuscule 0.0004ml of ink. No media need be present to perform the check.

If the new printing head is the heart of the machine, the blood is the new UltraChrome K3 Vivid Magenta. With a more vibrant magenta for both the full magenta and light magenta, this brings benefits of an expanded gamut and reduced metamerism. In the samples on display this was visually better in the reds, blues and magentas, bringing in additional Pantone colours including Reflex Blue and Rhodamine Red (the latter is actually a very bright magenta colour). Epson's claim is that they can achieve the gamut of the 12-ink systems of their rivals without resorting to the additional cartridges. The percentage of Pantones that may be represented is now at 85%. Our initial analysis confirms Epson's claim. The gamut volume was the highest ever measured, lifting the record of the Epson 3800 on Premium Luster from 909,950 to 933,264 on the Epson 11880. This is marginally higher than we measured for the Canon iPF 5000 (916,915) using a full gloss paper although to be even handed there is essentially no visible difference in data which are so closely matched. 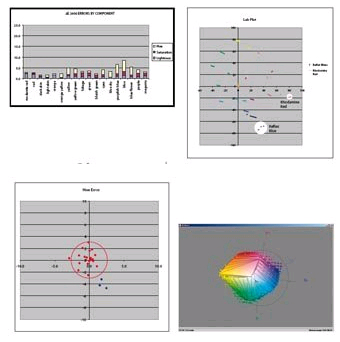 The improvement in the blues is quite an interesting topic. Over many thousands of audit tests we have found that the colour with the highest error is always the deep blue of the Macbeth Color Checker, a colour not quite as intense as Reflex Blue but visually quite similar. We might expect, therefore, that the expanded gamut will have the effect of improving the statistics although these particular blues are quite difficult to differentiate visually, as it is an area where the eye isnot very sensitive. However, the ΔE2000 methodology we employ is specifically designed to reflect what the eye sees in blue differences and so the measured errors are actually quite representative. Examining the plot shown indicates how far out the gamut surface is from the deep Macbeth Blue. Similarly Rhodamine Red is a long way from the pure magenta of the Macbeth Color Checker. It is a reasonable assumption then that the expanded gamut is going to deliver real, measurable improvements, especially for the proofing market, where numerical values are often taken to make decisions on 'pass' or 'fail'. For proofing purposes the dry-down rates of the new ink remain as high as their predecessor - prints are essentially stabilised within 30 minutes. Ordinary mortals can probably use the prints as reference materials immediately they come out of the printer.

The new printers carry the '880' tag and are the 4880. 7880, 9880 and 11880. The sizes of the media throat are 17, 24, 44 and 60 inches. The 11880 is thus a newcomer to the range in terms of size and also has on-board memory to speed the workflow even more. The 3800 remains unchanged although it was the test-bed for the new style of nozzles. No comment was made as to the availability of Vivid Magenta in 3800- sized cartridges. The entire '880' printer range carries both Matte and Photo Black inks, a significant help to users with mixed, art and gloss outputs. The new drivers also allow the same profile to be used at all resolutions, although we did measure some differences on the 3800. This would not affect photographic users, but would need attention for really high-grade proofing. Apparently the proofing and RIP manufacturers have been working with Epson for some time and so we can expect a smooth transition to the new ink set. The GMG RIP is already capable of astounding colour accuracy so the improvements will be measured by its ability to proof more spot colours.