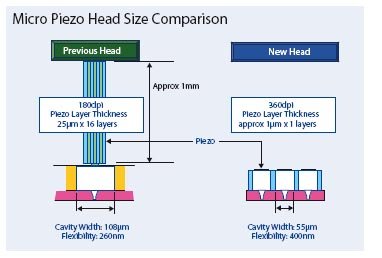 The ability to fire ink droplets in the way that they do is unique to Epson and a remarkable achievement of engineering. The system is based on the piezo electric crystal, discovered in 1880 by brothers, Jacques and Pierre Curie. By one of those quirky coincidences, Epson launched their new baby at the Royal Academy, which is alongside the The Linnean Society of London - Carl Linneaus was one of the early researchers of the topic of piezo effects but failed to unravel its mysteries.

A number of materials flex when an electrical current is passed through them, they are typified by the ferroelectric polycrystalline ceramics, but also includes quartz, topaz, tourmaline and lead zirconate titanate. The latter, for example, changes shape by 0.1% when it is charged. This is exactly the opposite working of your gas lighter. With the gas lighter you flex the crystal by squashing the trigger and the piezo crystal then sends a voltage out of its ends, which is then used to create a spark to ignite the gas. Being an essentially electronic device it can be vibrated by an alternating voltage at rates of 40,000 per second. This pulsating crystal is used to pump droplets of ink at this same rate. The size of the droplet is governed by the amount of displacement that can be induced in the crystal. It is always quite small; the crystal would have to be moving at many times the speed of sound if it had to travel back and forth over a long distance 40,000 times per second.

Herein lay the challenge for the Epson engineers in trying to increase the printing speed of the head. The droplets needed to be kept small to maintain the fine image detail, but making them bigger was a way of getting ink to paper faster. The trick was to pack more of the same size of heads into the same physical space while keeping the operating parameters the same. As the diagram shows, they have managed this. The speed increase at higher resolutions is a factor of 1.6, quite a worthwhile improvement.