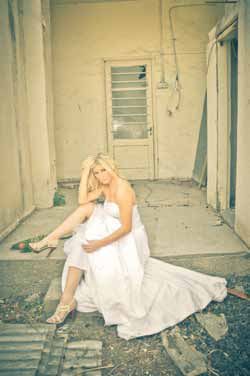 The next day was a full day of wedding training. We had a wonderful group of around 20 Cypriot photographers, white-hot sunshine and a fantastic venue to play in. The session dealt with using natural light and flash to shoot contemporary bridal images. It was fascinating speaking to the photographers there and finding out the processes and expected norms of a Cypriot wedding. Very different in some respects to the usual UK format but still with opportunities to get good shots on the day. Although they do have an advantage in that it's usually expected that the bride and groom will get their outfits on again a day or so after the wedding for more images. The hotel was absolutely gorgeous but on an early morning stroll I'd found a run down shack nearby that appeared to have been dumped on by every dog in Limassol. That was the place for me! The delegates visibly blanched as we walked over to it but quickly got the idea that you can create beautiful images whatever the surroundings. The session was supposed to finish around 5pm but we carried on late into the evening. The sunset wasn't as good as the previous night but once again the flash triggers worked their magic and 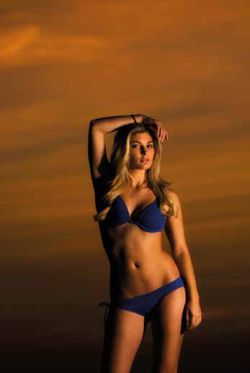 The main problem, and not one I often experience in East Yorkshire, was the sheer power of the sun. It blasted out everything and was impossible to ignore. Flash and reflectors were used to fill light onto Vivienne with the sun behind her or we turned her into full light and scorched her eyeballs! We also played around with the usual open shade but it seemed a pity not to use the light when it was there in such abundance. Image [5] opposite.

It's always good to test yourself in different ways. My day in Cyprus was another test of creativity that pushed me to both understand and then teach the way I was using the light. We were supposed to finish at 5pm but kept going until the sun had set and had a great time. A couple of beers and a cracking meal that night but an early night as the next morning was going to start at 5:30am with a beach shoot. [6] [7]

In dawn's early light I shambled into the foyer and met up with Viv. She looked wonderful, I looked a wreck, but that's the usual way of things. At the back of the hotel was a pier of stones that stretched out into the sea offering somewhere to stand and a perch for fishermen. The two old guys who were out there drowning worms that morning certainly had a surprise when Viv walked out and went through a repertoire of poses and outfits as the sun crept above the horizon. We started in minimal light with just a soft glow in the low sky. It always amazes me just how quickly the sun actually rises and that was certainly the case that day. We worked through a few different ideas and every angle I tried on the flashgun that radio signal came through and gave me full TTL control. That meant I only had to work the shutter speed to get the sky to the colour I wanted and control the ambient light. It's a really liberating feeling shooting in this way and I loved it. [8] [9]

Once there was no more detail in the sky we went onto the beach and the pool area and played around with some more glamour looks. By 10am we were all finished and ready for a late breakfast. The rest of the day was spent prepping for Malta, packing bags and a little light sunbathing and swimming. With temperatures in the high 20s centigrade it would have been rude not to. [10] [11] [12]