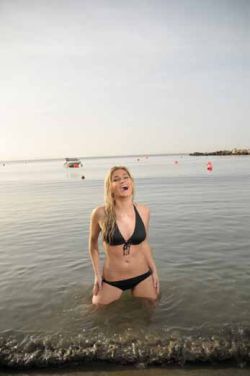 It was just as hot when we left Cyprus the next day and equally as warm when we arrived in Malta. The only substantial difference was that as we stepped off the plane, the heavens opened and presented monsoon conditions. It was wonderful though to walk out into the Arrivals hall and be greeted by a delegation from the Malta Institute of Professional Photography. Led by Charles Calleja they were to be our hosts for the weekend and more accommodating and generous hosts it's difficult to imagine.

We were driven through the deluge to our hotel. Dodging puddles and raised manhole covers and getting used to the casual attitude of the Maltese to direction indicators, speed limits, lane discipline and road safety in general. It's probably this competitive spirit that translates into their single-minded drive in photographic competitions, but it scared the hell out of me at times!

That night we were treated to a tour of the island, courtesy of Charles and his team. Viv and I were joined by Len Bateman and our driver, Trevor Sollars. Len proved to be great company and Trevor a wonderful host. One particular highlight was pulling up outside the Citadel, the home of the Maltese president. It's a beautiful building and has a park to one side. As we walked through the park we heard a boom that seemed to rock the world around us. It was either fireworks, a cannon or a bomb and either way I had a camera in my hand so wanted to see! We ran through the park and arrived on a terrace looking out over Valetta Harbour just as soldiers let fly with a second volley from a canon. It was an eight-gun salute for a large cruise liner passing through the harbour and we all tried to grab some shots. My effort was just using the available light, metering for the light and underexposing a touch then pressing the shutter just after the soldier touched his taper to the fuse. It was wonderfully unexpected and so good of that nice Mr Calleja to arrange it just for us.

Next day it was Friday and back to work. I was to give the first lecture of the day so no pressure! It's always a pleasure speaking to fellow photographers though and the smiles and applause soon told me I was on the right road and the session passed quickly. It was fantastic to be joined by Phil and Juliet (as well as Sally and Lucy.) The warmth with which they are welcomed on the island is indicative of the work they have put in to assisting and developing links with Malta.

In the afternoon it was judging time for panels submitted by the members for Ls, As and a couple of Fs. There were some wonderful images on display. If you're at the Convention when the L Challenge is on then get yourself down and try to second guess what the judges will say. It's a great way of understanding your own images better and also the process that judges go through to reach their decisions.

Saturday was the day we'd been looking forward to. It started early again, leaving the hotel at 6:30am and driving across the island to a villa that was also a wedding and party venue. We arrived in what looked like a very grand war zone. There had been a party the night before and the place was knee deep in mess. However, the staff worked like Trojans and quickly got it back to it's normal state and we were ready to roll. I was teaching boudoir techniques and we chose a nice room on the upper floor to start in, with a view to going off and exploring the rest of the villa later in the morning. Unfortunately the weather quickly turned against us. It was grey, dark and belting down. It was just like being back in Hull (surely this cannot be? - Ed.)