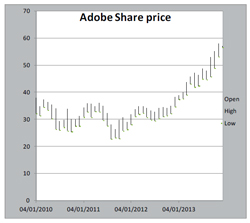 This charge may be levelled at Adobe but not at ProEngineer or Catia who were on a subscription model from the outset. Thus we may postulate that the outrage is because of being spoiled by Adobe between 1990 and 2013 and now it's payback time. The effect of all this on share prices is interesting. Dan Margulis, an opinionated commentator on matters Adobe is quoted below, but the graph of share prices does not support his claim over a more reasonable period, the shares are doing nicely thank you. "A day or two after the announcement, I said that this reaction was going to reduce the value of Adobe by about 15%. Since that time, as of this morning the company's value has indeed dropped 10 percent relative to the NASDAQ index, a paper loss to Adobe of over $2 billion." - Dan Margulis

I am fond of quoting the demise of QuarkXpress as an example of what happens when the bean counters get their sticky dabs on corporate policy. Quark became both complacent and greedy at the same time, they never saw the InDesign sledge racing down to hill to engulf and obliterate them in a matter of months. As embedded users of Adobe products, we cannot afford a Quark-like crash; there is nothing in the wings, the world has changed - QuarkXpress only performed a narrow range of design and layout functions and a single entity called InDesign was in the wings, with a heritage as Aldus PageMaker giving it a flying start. There is nothing in the wings on the scale of the entire Creative Cloud. This is just as well - as photographers we cannot afford Adobe to slip into the mire, it is too valuable to us, that is why we will grumble about the cost of the new pricing model but ultimately pay it.

Right, enough politics, let's see what is in Adobe CC.


This is quite simple, you pay up front for use of the software for a period of your choosing with discounts for longer commitments. Once you're registered, updates are available as they are launched and they seem to be averaging a couple per week. For mission-critical software this is a terrifying concept and runs against traditional thinking. At Imagemaker, for example, when a new operating systems comes out we build a new machine and run it in parallel for many weeks before committing to it. The same is true of software upgrades but even then we come unstuck. A typical example would be the bug in CS4 which trashed all small caps when you moved a packaged InDesign magazine to another machine. That particular error got all the way through to the printed magazine before we picked up on it - ah the best laid plans!

Your system must connect to the internet periodically so that the software can 'shake hands' with Adobe and confirm that you are still a paying customer. This will require a change of approach from people who insist on not allowing their mission-critical computers anywhere near the internet (and regardless of logic, they still exist - I was working with one such client just last week Ed.).