For readers of Imagemaker the most important applications are Photoshop and Lightroom (Bridge being a given). Illustrator, InDesign and Acrobat Pro are important for professional photographers involved in publishing and graphic design. Additionally, those involved in web design would be interested in Dreamweaver and those with video involvement Audition and Premiere.

The headlined (on the Adobe website) new features for Photoshop CC are:

There are also a number of 'enhancements' and the one which caught our eye was the modified Smart Sharpen. We tried this out and found (as others have) that it is cripplingly slow. When you change a slider it takes almost 15 seconds to update and this on 16GB of RAM and eight processors! Tests showed that the application was multithreading to accomplish the task, all eight processors were actively engaged. When used to sharpen a 300MB image, the process took almost 13 minutes on our Windows workstation and 41⁄2 minutes on our iMac. This is too slow for routine work - imagine doing a 400 shot wedding off a Nikon D800! 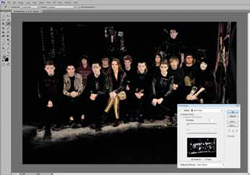 The selection of skin tones is a useful starting point for a mask-build even though it was not perfect.

Upright Modes is used for truing up architectural shots in which too much convergence has occurred. An automatic mode has been provided although this failed to accomplish the relatively simple task asked of it. However, with a combination of the Scale slider along with the new Aspect slider, it was possible to generate a pleasing correction.

The list at the head of this sub-section contains nine new features compared with 47 for the same list out of CS 6. The change if you are jumping an upgrade is thus much more significant. Overall the new features in CC are of minor significance to our readers. Perhaps typified of the difference is the CS6 skin tone colour range selector with its 'detect faces' feature which does have some potential.

Adobe Bridge has been pulled out as a separate application rather than making it an install from another of the Creative Suite programs. Technically this allows Adobe to tinker with Bridge independently which is a good thing. They have also removed some features from Bridge, notably the Output view from which contact sheets are made. This facility returns to the Automate drop-down of Photoshop, a location it should never have left in the first place!

Bridge can no longer be called from Photoshop menu bar, only by theshortcut Alt+Ctrl+0. It remains available from both InDesign and Illustratoras a menu-bar shortcut.