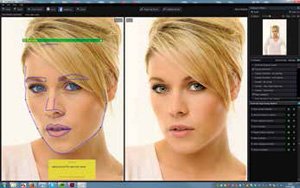 The PortraitPro interface shows the original (here, after auto placing of the guide lines) on the left and the modified image on the right. The controls are listed down the left side and may be collapsed to make space for their companions.

Smoky Eyes, Pouting Lips, High Cheekbones - thishas got it all, and we are talking about the software!PortraitPro 12 has just been released and we havehad a beta preview of the 64-bit Studio Max versionreplete with the new 'lighting control' and batchprocessing. The software is quite mature now and haswon lots of awards and accolades, including a numberfrom the Societies. 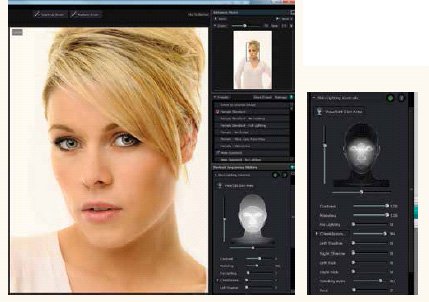 The new lighting controls start by identifying the mask of the face. This is used along with the guidelines to identify areas to be adjusted for lighting. The sliders for changing features are well set up so that subtle changes may be made; the update is very fast, helped along no doubt by the 64-bit operation. The controls are expanded in the view alongside.

It is unlikely that many members are unfamiliar with Portrait Pro but just in casethere are newcomers around - it is an automatic retouching program that hasbeen trained by 'looking' at around 300,000 images so that it can adjust facialfeatures to enhance them. It works by locating the corners of the eyes, the tip ofthe nose, the outline of the face and the outlines of both lips. This is doneautomatically (and seems better than ever in this latest issue) butmay then be manually tweaked after it has made its best guess.From there on there are controls for shapes and colours of theeyes, along with skin softening, facial sculpting and even hairadjusting. The newest feature allows for a change in the 'lighting'by shaping the shadows and highlights on the detected face maskof the image. While this can be done 'in-camera' under controlledconditions in the studio, it is not always possible to achieve thedesired level of control at, say, a wedding reception or service.