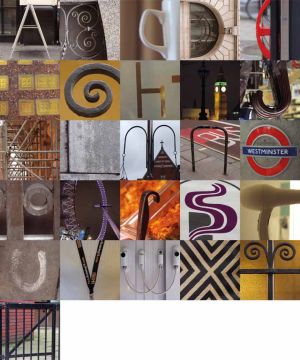 I had the great pleasure of speaking at the January 2011 Convention, held in London, England. One of my Master Classes was Wish It Dream It Do It, and the other was Thinking Outside The Box. During the Thinking Outside the Box lecture, I instructed the class on how to see their surroundings with a fresh set of eyes. One of the ways that this is achieved is to create Alphabet Soup in everyday occurrences, or in the surroundings you are in.

After several fun exercises I challenged the class to find parts of the alphabet in the room and, as a homework assignment, to find the complete alphabet and submit it to me. The rules were 'anything goes', and the photos were to be done either from the surroundings of London and/or the Convention. They could also use the surroundings of their home upon their return but within one week.

Since my personal belief is to 'walk the talk', I completed my Alphabet Soup on a subway excursion to the Bond Street area, as well as at other tourist sights in London.

Paul Shergold was the first to submit his alphabet from his surroundings at home. He also honoured the agreement within one week. Congratulations and well done Paul!

Pamela Ayers also submitted her alphabet from her sightseeing tour of London.

One major rule that I have not mentioned yet, is that the alphabet could only be found naturally occurring, in shapes, forms, shadows, and light. In other words you couldn't just go out and photograph letters on signs to complete your alphabet! By forcing yourself to actually search out the letters in the natural surroundings your brain actually comprehends the world differently. Science has shown that looking for abstracts in shapes and forms allows both the right and left hemispheres of the brain to function and work better. Who knew that the simple act of looking for the alphabet could improve your brainpower and your health!

Also when you do this, it is not a test in perfectionism. It doesn't have to be perfect and it is your unique interpretation of the letters. Having perfect exposure and technical aspects well done are definitely bonus points but your efforts are not critiqued entirely on those merits. The most important part of the assignment is to have fun!