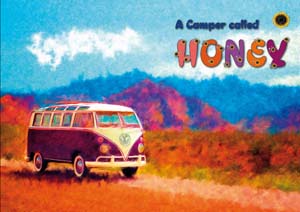 This is a tale that spans continents and generations, taking us back to the wild days of the sixties, free love, acid trips, Glastonbury, Sergeant Pepper LPs and the arcane VW world of Splitties, Bays and Wedges. Few vehicles seem to have such a nostalgic hold on the babyboomer generation as VW Campers and a whole infrastructure of dealers, restorers, books and magazines is thriving. To set off the opening spread we had Florida artist, Marilyn Sholin, paint Honey in her own vibrant style using the latest version of Corel Painter and Jonathan Brooks' original.

Our tale starts some four or five years ago, when Jonathan Brooks' brother-in-law, Michael, suggested that they should visit a VW show to unwind from wedding work. Jon found himself wandering around a green field in a complete daze, smitten by all the lovely show cars and vans on display.

Several shows later he had decided that it would be really good fun to own a van and has set his mind on a Samba! After a few weeks trawling the internet, one name kept cropping up in California and seemed to be offering the best looking vans, so Jon contacted the company, told them what he was looking for and within a couple of weeks, had an e-mail with a photograph of a Samba in blue and white, ready for restoration, the ideal one for his purpose. With considerable courage (he had never even driven one), he gulped and parted with the first slice of cash, down a pipe that exited (or was it overflowed) into the City of Angels. 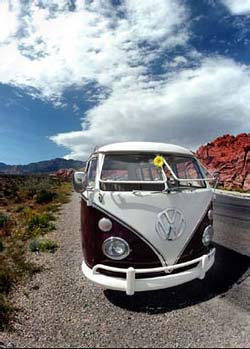 Many months later he was on a plane to California, combining pleasure with work, as he visited WPPI in Las Vegas and then had with a week in LA to see the van. Despite the assurance that he might be even able to give it a drive, it only arrived while he was there - as a freshly painted shell, on the back of a trailer!

After some deliberation Jon decided on a classic look with white wheels and a modest 1600cc power unit, avoiding the temptation for a lowered chassis, supercharged V8, wide profile slicks and a bling interior!

Several weeks later Jon was back in California to drive his investment around and visit a few friends. With a tight schedule, he only had a few hours one Sunday morning to try out the van so he posed along the Pacific Coast Highway