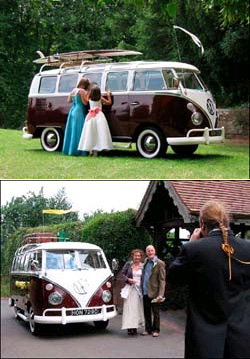 From Laguna Beach up to Huntington Beach (this is the coast road where every Sunday all the classic cars, Cadillacs, Thunderbirds, Beetles and Vans, and beach buggies, cruise along showing off ). With a few teething problems to resolve he soon returned to the garage and next day, within an hour of the van being road worthy again, he was off down the sixlane freeways out of Los Angles.

After climbing up the San Bernardino mountain pass and into the Mojave Desert with temperatures around 90 degrees or more, he now began worrying about over-heating but she climbed up and over the mountains without a cough, even passing the slower trucks with their waving drivers. She flew pass them and when they reached the top they free-wheeled some 15 miles down the other side of the high mountains with the engine off so as to cool it down, this was now an adventure! (Readers please note that by now, the lump of restored metal has assumed the gender of a lady and is being spoken of with some affection!)

All VW campers have to have a name and when she was rolled out of her container via the docks, fresh from the USA, when she was given the registration HON and because she was such a sweet-natured girl, the Honey was an obvious and lasting choice.

Jon says Honey is a lovely vehicle to own and is fun to take to meetings and shows. However, with the costs involved in restoration she now has to earn her keep and, for the sake of matrimonial bliss, she is regularly out on wedding hire. She seems to love the weddings and everywhere she goes she's admired and turns heads

Most of the restoration work was carried out in LA, by Robert Moen of Laguna Beach. Octavios replaced the seats and head lining, with some finishing off over here in the UK, in order to get an MOT. A period radio was purchased from Custom Auto Sound, in California. To complement the mood Jon has a colour-matched surf board, beach ball, period luggage and a roof rack as an optional extra.

For Jon, the acquisition and restoration overseas was a steep and expensive learning curve - well that's a precis of the colourful way it was described to your editor, think lots of noughts! However, undaunted, he is looking for a companion to keep her company, thus ignoring the slogan on my mate's t-shirt, "If it's blonde on top or got wheels you can't afford it!"


Please Note:
There is more than one page for this Article.
You are currently on page 2 Contact Jonathan Brooks