Last issue we discussed the notion of low-key portraiture and at the same time completed our initial discussions into the use of Giclee varnishes. It seemed timely therefore to concentrate for this part of Paper Chase on the options for real canvas as a material for placing an image upon. The options fall into two camps, wet photographic and inkjet. We will deal with them separately. If a canvas print is to be stretch mounted then there are a number of precautions that have to be taken at the shooting stage. This is of sufficient importance to justify its own page so take a look at the call out box before you get the camera out and put film into it!

It is amazing what you learn editing Professional Imagemaker. As soon as we started to do macro photography on the surfaces it became apparent that they were radically different. Off to the web then and a few phone calls to some mates from Lancashire mill towns. Canvas may be made with a variety of substrate fibres varying from the coarse materials typical of military regalia right through to the fine cotton weaves used by artists and painting backgrounds. They are typified by simple weaves, that is the warps and wefts are single or at most 4 threads combined. For those members not resident in Lancashire the weft threads run across the width of the cloth and the warps run down the length. From here on things as ever get a little more complex. For example Twill weave has more fibres in the warp direction, Oxford weave has two warps threads per weft, satin weave passes 4 warps fibres over each weft. If you are wondering what this has to do with photography it is that the look of the canvas depends upon the underlying weave and the first 5 inkjet canvases we looked at were all totally different - so much for us imagining that some of them were rebrands of identical materials! 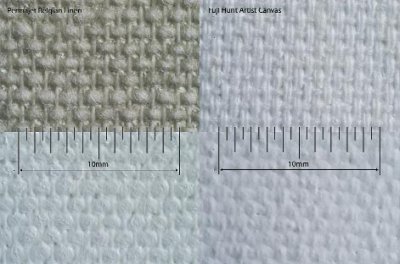 As an illustration we show you some macro shots to compare Permajet Belgian Linen and Fuji Hunt Artist Canvas. The Belgian linen is made from a single fine warp with a single, soft, coarse weft. When this is coated and the surface slightly compressed the effect appears as a diamond, slanting pattern in some light and as a stronger horizontal pattern in others. If the coated surface is examined closely the softer, fluffy warp threads can be distinguished bound into the coating. It is this dynamic shift in properties, which gives a canvas print a lot of its charm.

By contrast the Fuji Artist Canvas is an Oxford weave utilising twin warp fibres. These are smaller and harder than the weft fibre but because the two of them are about equal in size to the weft, the overall patterning is more even and non-directional. You should be able to note also from the pictures that the Fuji is more matte than the Permajet.

The strength and directional properties of the canvas are important when it comes to framing and stretching a canvas. One of the problems that the framer has is the higher elasticity of the photographic materials compared to oil painting canvasses. Inkjet canvas is often lighter and stretchier and requires a little more care during the mounting process.

Paper chaseHaving chosen or identified the base weave the characterisation is far from complete. All inkjet media is coated with an ink receptive layer - we spoke of this at some length in the introductory article to Paper Case some months ago. For paper substrates the coating is usually arranged so as not to influence the texture of the substrate. With a canvas the coating is far thicker and probably has also to be far more flexible. The surface effects are therefore subtle and distinguished (in the positive sense of the words). Even when the coating has been sloshed on things remain complex. The final finishing effects the way the canvas looks; the surface morphology (detailed structure at the particle level) effects the diffusion rates of the different inks and the gloss effects the depth of the black that is measured and (sometimes) observed. The final complication is the use of optical brightening agents (OBAs) in the surface mix. OBAs absorb ultra violet light rays, fluoresce and emit rays of a different colour. Usually they produce a crisper, cooler look to a print and a cooler grey (i.e. more blue). In our test regime, the Monaco profiling software is set up to be clever enough to ignore the effect of the fluorescence and to place the colour of the grey scale so that it matches the underlying base tone, particularly at the highlight end. A good profile therefore clusters the grey tones tightly around the base hue, not a strictly colourmetric neutral.

The combined effects of all the parameters above determines the maximum density that the paper/ink combination can generate. If the ink absorbs deep into the surface its effect is lessened and if a surface is matte it inherently diffuses light and causes the black to look weaker. The undulations in the canvas complicate the matter yet further.

The good news to all this is that despite the complexity of what is going on, the end result is a gloriously sumptuous texture to the final print, which invariably brings a positive comment from the viewer. You are getting the best of both worlds - photographic fidelity with painterly emotions! 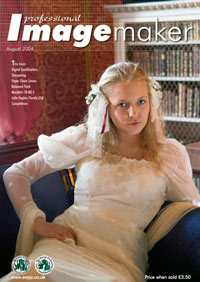