Clowning Around - Alistair Campbell - part 1 of 1 2 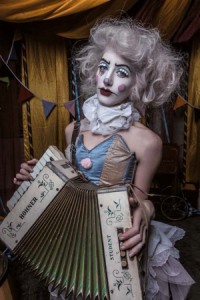 Every so often when judging an image pops up and a little light goes off in my head - it's the 'font cover' alarm! As soon as Alistair Campbell's clown was placed on the easel in the 16x20 competition, the alarm went ballistic. Fortunately the image was greatly admired by the other judges and as the numbers were slowly whittled down, its stock rose as more of them transferred their preferences. In the end it won the Portrait, Avante Garde section relatively easily. Many complimentary remarks were made and it ended up on the easel with a small number of equally admired images from the other two portrait categories to decide the overall portrait winner. These other images were Martin Leckie's 'Portrait, Children' entry and Guhir Joval's 'Portrait, Classical'. The judges' dilemma at this stage is always the same - trying to compare and contrast radically different images.

All three images were, of course already category winners - in itself quite an honour from such a competitive entry. The argument went to and fro for some time but it was the startling impact of the clown image which eventually won the day. By this time I had already started to formulate ideas on how to place the clown on the cover of Imagemaker - should it be full bleed, should it be bordered or should the grey hair be cut through the masthead? By tradition I knew it would have to wait until the issue after the Photographer of the Year report as that always takes precedence, but this at least gave me time to gather the story behind the image and to seek out any others from the same shoot - it seemed inconceivable at the time that the presented image was a solo and so it turned out! 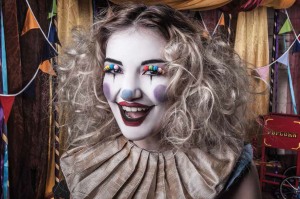 Here then is the clown's story, it turns out she had a companion! We have used Alistair's own words for the commentary which follows.

The 'Clown' series originally came from a conversation between me and a make-up artist I work with; it was a pretty informal conversation consisting of: 'Hey Ali, you like odd stuff don't you?" - Yep - "What about clowns?... they are a bit weird" - Yep. And that was that, as they say. In all seriousness though, I usually only shoot something if it has some meaning to me (unless it's commissioned work). There is a little film I love from 2010 called The Illusionist; it's a French animation from a director called Sylvain Chomet which follows the story of a tired old magician struggling to make his way in a changing world of pop music and modern entertainment. The magician travels with several other traditional performers from town to town, trying to make a living. All of them are slowly becoming more destitute and depressed. One of her fellow performers is a clown. (There is a slight harrowing and sad feel to most of my work, and I've always said I try to shoot how I feel.) The clown series itself is likely to become part of a larger sequence as I am going to be continuing to capture each of these classical performers in my own way over the next couple of years, the next in line is an opera singer (with Viking hat included).