Clowning Around - Alistair Campbell - part 2 of 1 2

Sometimes I have an idea and need to shoot it, other times people contact me to see if their idea is something that would fit in with my body of work. In this case my MUA had a contact nearby who operates 'A Very Vintage Hire Co'. They had a load of new props in stock and needed some promotional images to advertise themselves (72 countries should do the trick - Ed!). The clown series was shot on location at Vintage Hire in Exeter; as the name suggests, they specialise in propping with a vintage theme. So going back to my original paragraph, for me this image represents lost art.

There were two clowns in this sequence, both MUAs and each did the other's make-up; in essence this works perfectly, but in practice you actually get two women talking quite a lot about make-up (something to bear in mind for the future). The model in the winning image is Gemma Louise Williams, her make-up goes under the name, The White Rabbit Make-up Artist (Taunton). The other clown, and MUA, is Rebecca Rose Robinson from Bristol. The contacts are as follows: Gemma Louise Williams - www.gemmalouisewilliams.co.uk Rebecca Rose Robinson - www.rebeccaroserobinson.com Location/set dressing - A Very Vintage Hire Co in Exeter. https://www.veryvintagehire.co.uk/ 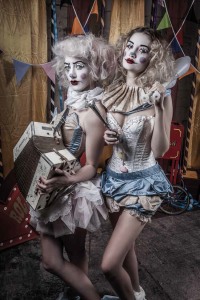 There was no special lighting involved for this shoot. Much of the time I only shoot with one light, often none. On this particular day I decided to go with a simple two-light set-up with two soft-boxes, mainly because there were two models and the set was so big. After shooting for about 45 minutes (we like to take things easy down here in Somerset!), I was happy with what we had been getting but something in my brain said, "Why are you shooting with two lights, you never shoot with two lights, so why now?" So I turned one light off and shot a couple of simple portraits of both the girls; something just clicked with Gemma, the way the accordion sat in front of her, the way the light fell away on the background, the appropriate amount of nonchalance, which all led to the final look and feel of this image. Other than my usual muted editing style there was no special or specific post-work carried out on these images. I always edit in roughly the same way (when appropriate); I think my editing style, colour and tone is quite similar and distinct throughout most of my work for the last couple of years; even when I've tried to break away from it something kept me back there and I seem to always revert to my own style in the end.

The printing for the 16x20 competition was done by a local independent printers; we did have a couple of attempts at it to get it looking just right. Before this image I had never had, nor seen any of my work printed out, there is something unique about seeing a printed piece of work, rather than seeing it on screen, which I'd not experienced before; it's even more interesting to me now since seeing all the great images and different styles in print at the Convention.

There are no more plans at the moment for more clowns as I'd like to carry on with some different character portraits, however, I'd like to re-visit a clown series at some point in the future. I rather fancy a slightly darker feel, the possibilities for what clowns can get up to seem pretty much endless.