Aled Oldfield is a bit of a mixed bag when it comes to his photographic background.

'My Dad did reconnaissance photography in the war, that's how I got involved. After I left school I got an apprenticeship as a photographer.' However, a winding career saw him managing busy photographic labs before ending up running his own studio in North Wales, shooting weddings and family portraits.

Aled's experience in running labs means that he is called on to help judge the print panels that are submitted at the Convention every year so I asked him what advice he had for those considering qualification. 'There has to be no mistakes in the print panel. That's everything from the print quality to the mounting. The tonal range of the print has to catch your eye and I think that is a skill that seems to be lost at the moment. You have to manipulate the print, dodging and burning it, in order to make your eye look in the right place.'

You might expect Aled to have nominated a printing gadget to talk about considering his passion for getting prints right, however, his first choice was the Phottix Odin TTL Flash Trigger which he uses when shooting weddings and portraits on location. 'My original training was as an architectural photographer and what I like about the Phottix Odin is that you can control multiple different lights, adding gels to each one and mixing it up.' It's a style Aled has been developing over the years, although previously he tended to use video lights when on location. 'Using this style of lighting, in my opinion, brings a bit more depth to your images.' 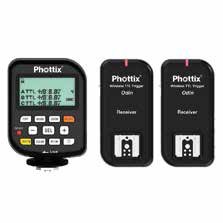 The Phottix Odin allows Aled to run a slicker operation than he could previously; 'The real advantage of these triggers is that you can do everything from the camera. Before we had the Phottix Odin I would have to run to a flashgun to adjust the levels. Now I can do everything from the camera which speeds up the whole process.'

But why Phottix rather than a more widely known brand? 'When I saw the Phottix Odin's at the Convention a few years ago, one of the things that drew me to them was the low initial investment.

You can start off with just one receiver and transmitter and build up your system from there. The other advantage is that they seem to be less fussy than other brands when you start them up.

With some triggers if you don't manage to do everything in the right order, the whole system gets confused! On the whole, the Phottix Odin seems to just work consistently, which is obviously very desirable for a working photographer.'