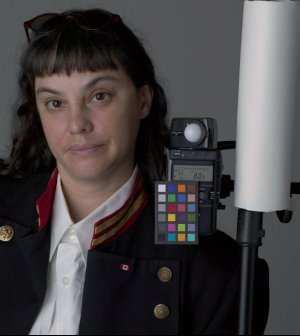 Having made it back, safe and sound from the SWPP Coventry Convention to very rainy Vancouver, I sit wide-awake at 4 am (jet-lag is still haunting my sleeping hours) reflecting on that action packed, fun-filled event. During my morning talk at the convention, I tried to pack the essence of a two-day workshop on digital standardization into two hours. As you can imagine some of the info ended up on the "editing room floor" so in this article, after a brief synopsis of my talk, let's pick up one of those edited "bits" - pre-visualizing printing values from Photoshop densitometer read-outs - and see how you might implement it into your digital repertoire for a healthier, less fearful workflow.

My two-hour talk consisted of a discussion on how one might take the positive aspects of a JPG workflow (speed and standardized processing) and marry it to a RAW-only workflow. Starting with an exposure test done in 1/10th stop increments, I demonstrated how one could find the true sensitivity or ISO of a digital SLR. From these test shots, the best exposure is selected [2]. This is a rather tricky procedure since you are dealing with unprocessed RAW data [1] and so run into that age-old conundrum "which came first, the chicken or the egg". The crux of the matter is, you cannot decide on the best processing settings until you know which exposure is best, yet you cannot choose the best exposure until you have processed the files. Anyhow after determining a preliminary processing setting we overcame that hurdle and moved on to figuring out the optimum processing settings for your system and for your way of shooting. With JPG you are pretty much stuck to the processing, set at the factory, by a technician, who has never seen how you shoot, hence the blown out wedding dress and blocked-up tux syndrome. After establishing your optimum process settings in Photoshop's Camera Raw we learned how to create an Action that recorded processing a raw file in Camera Raw then creating a Droplet (an automation feature found under the File/Automate menu in Photoshop) that would allow you to create a drag and drop batch process using the new processing Action. In the end one would simply drag a file, or a folder of files, or several folders of files on to the processing Droplet thumbnail on your desktop. The Droplet fires up Photoshop, if it is not already up and running, then processes each image in just seconds and saves them out as Tiffs, JPGs, PSDs, or whatever, to a "processed only" folder. Now your images are ready to go just like your old JPGs would be. The advantage of this Raw automated workflow is, with only slightly more time spent (that's computer processing time, not human time) you end up with files that are processed to your way of seeing, and you get to keep the Raw data - a real bonus just in case you need to bail-out an important image with bad exposure/contrast/colour. Raw data, which is high bit data (typically 12 bits per channel or 4096 levels of tone for digital SLR cameras), is like a negative, it contains way more data than the print or in the case of digital, the JPG. A JPG can only exist in low bit (8 bits per channel or 256 levels of tone) therefore Raw provides you with much more editing headroom. As you can see, at my talk, we covered off a lot in two hours, if you missed the talk or want to review, you can order a tutorial CD from me at montizambert@telus.com that covers all this and more, plus it contains files for you to work along in Camera Raw and Photoshop with the tutorial movie. 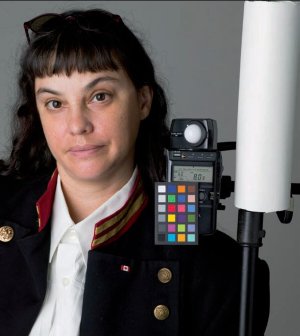 One area of my talk that I did not get to cover last January, due to time constraints, was a thing I gave the baffling name "Reproduction Value Recognition". Its really a very simple concept, however I believe you should always give all things photographic impressive confusing names so that you can impress people allowing you to charge more money - I learned that from my lawyer who has a degree in verbal flatulence. When you check-out an image in Photoshop to see how it looks and to perhaps get some idea of how it will look when it prints, we are told not to trust what we see on the screen, but to read the brightness and colour values sampled by your cursor and displayed in the Info Palette. From these numbers, they say, you can predict quite accurately how your image will look when printed. Now how on earth do you get that from a bunch of numbers? Besides, who is the body of people called "they" and how is it that they can see through numbers? Well "they" aren't talking; in fact they aren't even listed in the telephone book or even the yellow pages under "They". After a period of pondering this "seeing through numbers" I recalled a conversation with my local pre-press guru, John Lau. I would often ply John with a few pints of beer, so that I could bombard him with questions on how to colour correct in CMYK. After practicing John's teachings for a couple of weeks I found that I was not getting any better at it. At the next bout of beer swilling with John, he explained to me that it is very difficult to learn by the numbers when you have no way of seeing the results. For him it was easy, he always got to see the results of his corrections in fairly short order - John tested his corrections by printing the corrected image on a proofing device such as a Fuji One Print or a Color-Match proofing system that simulate press conditions. With this he could begin to correlate what a series of numbers actually looked like. Really no different than how you know what a Zone 6 (Ansel Adam's Zone system) looks like - you originally identified Zone 6 with your meter then were able to see the result after you printed it - cause and effect. So what we need is a "Read-it and See-it" system so that we don't have to live in fear of questions like, "Will the highlights burn-out or will the Shadows block-up losing all detail and if so will it look okay printed or what does slight detail look like in a shadow?"