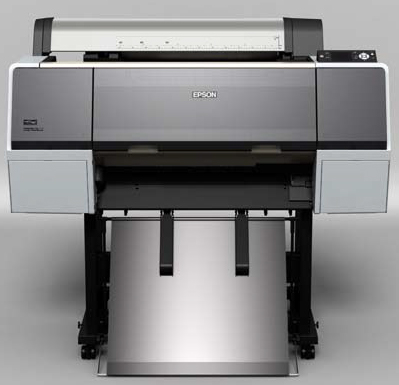 Epson's Vivid Magenta ink technology expanded the gamut of their prints and has now been introduced to the replacement for the 2400, the Stylus Pro 2880. So far so good, now we have a desktop machine with an even wider gamut, although it is at the expense of the cartridge size which has dropped to 13ml each, presumably so they can fit the extra one in.

However, and more importantly for professionals, they have introduced a yet larger gamut ink set for the wideformat professional machines, which carry a '9' in their name, eg 7900 or 9900 (note the 7880 and the 9880 are not superseded). The cartridge bay now holds both Matte Black and Photo Black inks, along with the usual suspects, but joined by an orange and a green. Epson UltraChrome HDR now includes:Pk, Mk, Lk, LLk - C, Lc - VM, Lvm - Y - Orange - Green

The claimed advantages are higher gamut and smoother skin tones. The ability to change from matt to photo ink is also a huge benefit, which has been long awaited. While we have not yet tested the actual machines, we have had prints made and obtained a provisional set of profiles.

The data are outstanding. The gamut is not only the largest that we have measured to date (on a printer), it is also quite a large increment and the gamut volume has surpassed the 1 million unit mark for the first time.

Although the look of the print does not change at the 1 million point, it is nice for the advertising boys to have these nuggets of data to boast about (and the end user if they are selling their services as a printer). The measurement and display of gamut and gamut volume is a fickle subject, so bear in mind that our measurements are always done the same way and that our figures are often smaller than those calculated by, say, Monaco Profiler. This is to do with the mathematics expressing Lab and not real differences in the actual colour spaces.