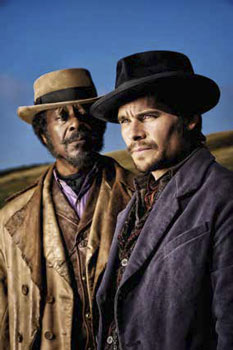 One of the biggest projects for me in 2015 was the ITV drama Jerichothat is currently on our screens and for which I was chosen as thephotographer. While we have seen many a western about winning theWild West and other feature films showing how other similar locationshave been conquered, Jericho is a story that has never before been toldthrough drama and tells the story of how Britain was tamed.

Filmed around Sheffield and Huddersfield, it was important to not showany signs of 'civilisation', anywhere. No farmers' dry stone walls andno buildings were to be left in frame to give a feeling of isolation andwildness despite being only a short walk to either the tea table or ashort journey back to unit base for a hot lunch (both very welcome on acold and rainy day).

For the actual photographs, I decided to change my approach. First ofall, I bought and watched the Terrance Mallick movie Days of Heaven.This movie is known for being breathtakingly beautiful because it wasonly shot during twilight hours and as a result, is very inspiring.

I also studied some of the original pictures from the early locationportrait photographers and how the subjects reacted to this newfangled machine called a 'camera'. It may be a strange thought inthe modern era of selfies and the prevalence of cameras - we areundoubtedly the most photographed generation ever, yet people backthen were very rarely photographed or even saw a camera.

The main difference for me is that they looked at the camera completelydifferently. Instead of today's overconfidence due to familiarity, orindeed sometimes extreme shyness for the same reasons, the oldphotographs exude curiosity, openness and maybe sometimes, due to afear of the unknown, a stoic defensiveness.

So, I decided to try to capture this mood and explained to the castexactly the look that I was after, whenever shooting any of their portraitsto camera. They loved the fact that I was taking the images to this levelof detail and in a world where I often find it difficult to get any time withthe artists due to their filming commitments, it made a very refreshingchange to have THEM badgering ME to have their picture taken and atone stage, actually had them queueing up for my services!

As the weeks rolled by and with me visiting the set on selected days, Imanaged to build a collection of photographs of which I was very proud.The final approach to making my images different to other projects,was studying in detail some of the lighting techniques used in film andadapting them for my stills.