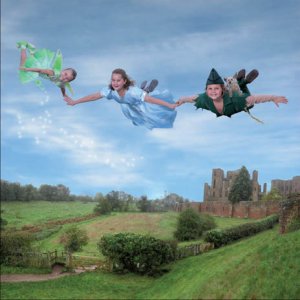 Once in a while you get a job that is just plain fun to do. This one came from a family who hoped we could capture for them the fantasy and innocence of childhood. They wanted a memory. The children had just participated in the play Peter Pan, and had cute costumes, so we decided to go with the theme of Neverland.

The flying idea was mine, so I set up the poses. We took a posing stool and photographed outside with flat lighting for two reasons: first, because we wanted to avoid drama in lighting in order to keep within the plan of light and innocence, and, second, because we did not yet have the background images selected and did not know what that lighting might be. Patrick used the Canon 20-D so he could move around quickly. He used a reflector on the ground in front of the children to bounce light into their faces to increase the feeling we wanted.

The expressions are all Patrick's - he is an amazing photographer!

The children posed with their tummies on the stool - I made sure the chest was visible to camera - and they held out their arms while I lifted their legs and made sure their feet were in good position. I turned their bodies on the stool so we would have a few options for flying. The dog was photographed on a whim - it's a very old dog and the kids adore her. We asked the kids to hold the ears up so it would look like wind blowing - and if we had thought ahead even more completely, we might have brought a leaf blower or something to blow the children's hair as well, but it works out nicely as is. 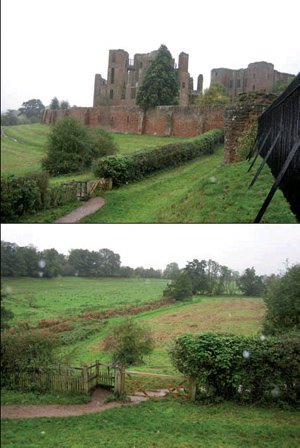 Next, the background images:

Coincidently, I had recently returned from teaching in the UK and had visited an old castle with my good friend Maz Mashru, one of the UK's most decorated professional portrait photographers. It was cold and slightly raining, but I took out my little Canon PowerShot SD450 and we snapped a few pictures anyway, just to have a souvenir. Coincidently, we were standing on a bridge photographing down and across the English countryside. We don't know which one of us took these images - but they became the perfect background for this fantasy portrait and we share the final product.

We were going for a 36x36 canvas and the files from the little Elph are a bit small. I planned to panorama them across the bottom of the image so we wouldn't have to enlarge them as much. (Notice the gates in the final image are actually the same gate from different angles.)

The sky was poor in the English snapshots, and although I could have painted one in, I wanted to have consistency within the portrait so we looked for skies in our archives and came up with this one from British Columbia.