Regardless of the debate above, raw file handling software is getting more numerous. The main players outside the camera manufacturers are shown in the table below:

Of these, the writer has used Photoshop, Phase 1 Capture and RawShooter in anger (ie on real jobs), has seen Thumbs Plus in action, but has no direct experience of Aperture, Bibble Pro and dcraw. Dcraw is interesting, as it is an open source program written in "c" and, therefore, robust against changes in software availability - it is also free, of course. Its only downside is that expertise is needed to use it. However it does provide a get-out clause for long-term legacy problems, they should not exist with altruistic people like Dave Coffin around!

RawShooter is worthy of note and is reviewed in some detail.

Michael Jonsson, who originally did the Phase One software, engineered its coding architecture. It is also one of the least expensive of the third party RAW handlers and has received rave reviews from most of the magazines that have looked at it.

The software engineering has all the hallmarks of good design; it is slick, easy to use and very quick, quite obviously coded for efficient operation. For example the previews of images slam up to full resolution having introduced themselves as low-res proxies. This is a subtle point but massively important if you are scooting through a bunch of images. What then happens is that you get a very quick look at your image and if it is not the one you are searching for, you move on without delay. The comfort factor of being able to work like this is actually worth the cost of the software! Similar software design allows the same concept to kick in when you are using the magnifier. 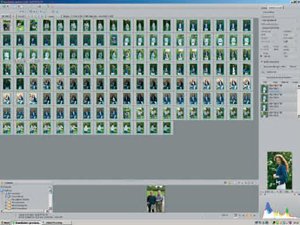 Here again, instead of waiting for the whole image to render up at full size you get a fast and accurate snapshot, just like using an optical loupe.

When correcting images the software has all the usual knobs, buttons, sliders and graphs, which anybody, who has used a RAW file, will be familiar with. They are a representative set of all the adjustments that are available in all RAW file handlers.

The screen view was a reasonably accurate representation of what turned up in Photoshop on a calibrated system.