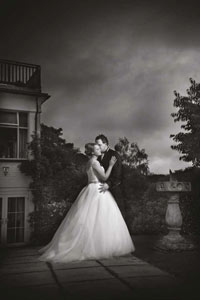 Tom Gibson and his partner Angela have been inbusiness up in Scotland for 13 years now, working fromtheir studio in a small community in Ayrshire. It allstarted when Tom was considering leaving the RoyalAir Force and photography somehow became the firstchoice.

'It's about telling the story of the day,' says Tom when I askwhy he and his partner Angela refer to themselves asstorytellers. 'The different parts of the day are like smalleracts in a play. The album comes together to give an overallnarrative for the day, which is much nicer than just having a collection ofpictures that don't really fit together.' But what style does Tom consider hiswork? 'There are people who say they're classical photographers, peoplewho say they're reportage, and all other kinds of styles, but I think todo a wedding justice you have to do all of them. The best albums bringtogether a good set of pictures which cover all of the genres.'

Unlike many who turn professional, Tom hasn't always been aphotographer. 'Don't ask me how I came to the decision that I wantedto be a photographer, it was just one of those things.' Angela had alwayscarried a camera, but until that moment it was never really somethingthat Tom had been interested in. 'We were going on holiday to the OuterHebrides just after I brought up the idea of going self-employed as aphotographer, so Angela said that I could use the camera in the morningand evenings to try to shoot some images, which of course I did. When wegot back I showed the pictures to a photography trainer and he thoughtI had a quirky eye for taking pictures. I invested in training, opened thestudio, and the rest is history!' 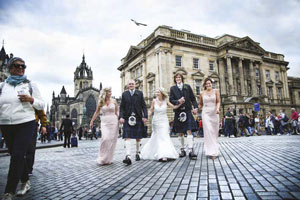 Tom and Angela both work full time in their photography business now.While Tom 'only' takes the pictures, Angela takes on the running of thestudio day to day. 'Angela does all the album designs, as well as theviewings and sales with our couples. She also markets our business andsources all the new products. It doesn't seem like I do much when I putit like that!' Of course it's not true at all - Tom spends his days shootingwork other than weddings, with subjects as diverse as newborns, foodphotography and commercial interiors. 'One genre of photography canfeed off another. For instance many of the venues that we shoot weddingsat will ask us for pictures for their brochures. That relationship will thenlead to other work too, perhaps food photography for example.'

Networking doesn't stop at potential clients though, Tom also believesit's useful to network with other photography professionals. In fact whenI spoke to Tom he was getting ready to shoot three weddings for a friendwho had damaged his Achilles tendon, when he was expecting a longweekend off! 'You have to know people who can step in and provide asimilar product to yourself, so that if you cannot cover a client's weddingfor any reason you have people that you trust who can step right in.' Toomany photographers don't give enough thought to what might happenif they were ill before a wedding; 'You don't want to hand a wedding thatsomeone had paid you, for example, £2,000 for to someone who onlyregularly charges half of that. It will damage your reputation in the longrun.'

An interest in the history of art led Tom down the route of studying withthe Open University and he now has only one module left to finish hisdegree. 'I've always been interested in art,' he says when I ask why chosehistory of art as a subject. 'I used to paint and draw when I was youngerand I even entered the odd competition! I never won anything though.But painters such as Rembrandt and Da Vinci interest me as well as lotsof other Renaissance painters so I wanted to learn more about them.' Italmost wasn't history of art though, Tom also considered teaching as acareer rather than art and photography; 'I considered doing a degree ata university instead of distance learning, and perhaps then going on toteaching afterwards. Teaching interests me because I was an instructorin the RAF, where I have experience not only with teaching but also withwriting manuals and all sorts of other related things.' With that in mind,it's really no wonder that Tom jumped at the chance to teach at theConvention for a third time.