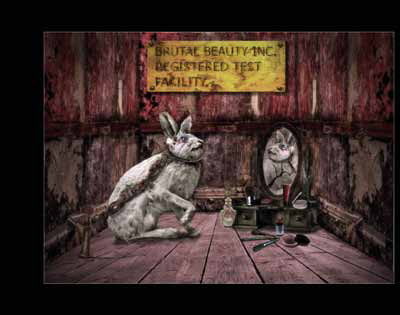 As shown with our selection here, the Big Idea can take a number of forms and directions in development. Helen Sapiecha's work comes right from the heart, Jamie Thompson's does also, but has a more measured intent, a more closely defined goal. Despite this, both are equally brooding. Lifeboats on Call is an exercise in marshalling the troops, organising the shoots and then the daunting task of bring it all together in a whopping big exhibition.

All have equal merit, it is the final result that counts. We finish up with some advice from Tracey Harper on a Big Idea that anybody can try - making alphabets. The Big Idea - how does one come about? Before you can have a big idea you have to have something you wish to say.

The idea can sometimes come at you from the other direction, you take or see a picture and that in itself triggers an idea or an avenue for exploration, a way of using or developing the image. All Big Ideas need to either answer a question, pose a question, or fulfil a need. A successful Big Idea can be an answer to a question posed while you were trying to generate an idea; there are no rules about the order in which things happen!

If the question is already posed, the answer is slightly easier to come by; this is the way an advertising agency would approach the task - find out what the client wants to say and then devise ways of saying it.

It is at this stage that 'brainstorming' comes into its own. It was once described to me by a trainer from the Ford Motor Company as being 'a way of making people sit down and take coffee together - but then keeping them at the table'. Big companies use brainstorming to solve complex problems, advertising agencies use brainstorming to come up with big ideas - 'simples'.

AN IMPERFECT BRAINSTORM
Wharton Research recently authored a paper entitled How Group Dynamics May Be Killing Innovation. Here are some quotes:
"When it comes to innovation, however, what really matters is not getting many good ideas, but getting one or two exceptional ideas. That's really what innovation is all about."
"It's no good generating a great idea if you don't recognize the idea as great. It's like me sitting here and saying I had the idea for Amazon. If I had the idea but didn't do anything about it, then it really doesn't matter that I had the idea."
"In a typical brainstorming meeting, it's not fair and everybody knows it: The boss is always right."
"We find huge differences in people's levels of creativity, and we just have to face it. We're not all good singers and we're not all good runners, so why should we expect that we all are good idea generators?"