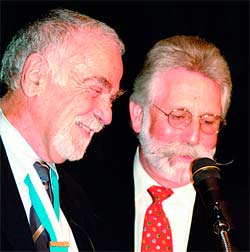 A motley crew of photographers landed in Las Vegas last month, not to learn about the finer points of photography as practised by our American cousins, Oh No! Our intrepid leader started off by terrorising the hotel staff, our accommodation only scored 20 out of 100 on the cleanliness stakes and zero on the view. With true Denbigh grit "Jones the Slot" vented his full wrath on the staff. They realised they were dealing with a man of some stature, (have you seen Phil lately?) and soon gave us VIP rooms with a commanding view of the strip.

The SWPP also managed some business during these times of reckless abandon. The Wedding and Portrait Photographers International convention held each year in Las Vegas, Nevada, plays host to the world's wedding and portrait photographers. Speakers were on full song and not only informed, but entertained, in true Vegas style.

The great Monte Zucker started us off extolling the virtues of the Canon D60. He has being headlining at the WPPI for 21 years and has made a total conversion to the digital. The ease of which he created classical portraits on stage in front of the 1000-strong audience was breathtaking, and the results were projected in real-time.

Hanson Fong is a photographer operating out of San Francisco and commands a high fee for his work, however he works quickly and with the assuredness that instills the utmost confidence in you. In contrast to Monte Zucker, Hanson worked at speed, producing 20 to 30 free-flowing images of a bride and groom at the rate of one every four or five seconds, with the variety and flair of the true professional. Keeping posing simple and the bride's movement to a minimum, he achieves a classical but informal look much sought after by today's couples. The entire room gave him a 5-minute standing ovation at the end.

Denis Reggie is a different beast altogether. He follows his clients throughout their day, trying not to intrude on the family and guests. He typically takes between 2500 and 3000 images, achieving a blend of photojournalism and posed "Scene Setters". He is another photographer who has made the transition to digital and saved over $250,000 last year alone!

With 30 or so speakers to see and a sizeable tradeshow to browse around, the overwhelming impression is that the Americans have embraced the digital revolution and will take the industry by storm.

If you get the chance to go and marvel at this wonderful event, it's worth every penny. However, why not enter our monthly print competitions, the overall winner of this year's entries, is a paid trip to Las Vegas and the WPPI 2003 show at Ballys Casino Resort next February. 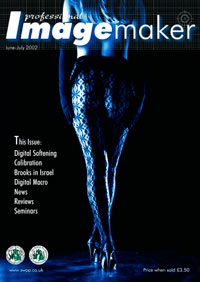