The Maltese in china

Around this time a year ago I was uploading a couple of pictures on Faceboook when a short message from our MIPP President, Kevin Casha popped up on my screen: "Hi Joe, are you busy in November?" I replied that as far as I knew it was still an easy month. Another message: "Want to go to China?" Now I was scrambling for my diary, hoping that October was a really easy month! It was, and next thing I was on the phone to Kevin.

Two years earlier, Kevin had successfully represented Malta at the Jinan Photo Biennial at the invitation of the Chinese Ministry of Culture through the China Cultural Centre in Malta. The Centre had contacted Kevin again and asked him to suggest someone who could participate in the 2010 Biennial. Kevin kindly enough put my name forward, and after submitting a few samples of my work, I was given the green light by the Chinese Cultural Centre in Malta. 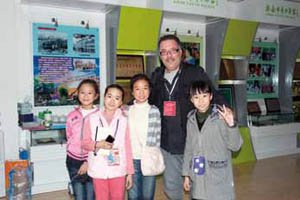 The Jinan Photo Biennial is part of the Qilu International Photo week and it has become customary for the Chinese authorities to invite a photographer from each country where it is represented by a Cultural Centre. The centres include Paris, Cairo, Benin, Mauritius, South Korea, Mongolia and Malta. As I was to experience, this event is one of major proportions and given great importance by the Chinese Cultural authorities and by the press.

My flight itinerary saw me flying out to Cairo and then onwards on a nine-hour flight to Beijing. As I was queuing to board the aircraft in Cairo, I had a nice surprise as I spotted Ayman Lotfy, a highly respected Egyptian photographer who had been a guest speaker at the MIPPSWPP seminar in Malta a couple of years before. He was also on the way to participate in the biennial. Needless to say, we stuck around together for most of the time and made some great pictures in the process.

Our Chinese hosts had laid out an interesting programme for us. Three days in Beijing was followed by a five-day stay in Jinan. Hospitality was second to none and everything was planned to the last detail. After checking in at the hotel in Beijing, we met with the photographers from Benin, Mauritius and Mongolia and we all had dinner with our Chinese hosts.