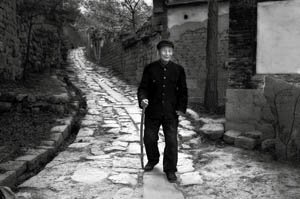 Press coverage of the event was the most comprehensive that I have witnessed to date. You could feel that there was genuine interest in the 3000+ exhibits which were split between the Shungeng Convention and Exhibition Centre, and the Shangdong University of Art and Design. We were bombarded with questions on everything photographic. Chinese photographers and photographic students from the Shandong University were queuing to have their photo taken with us! I can safely say that I have never before been photographed so many times in one occasion!

The venue also hosted a trade show and other activities during the week. One of these events was a well-attended fashion show featuring Chinese models and fashion designers. I was craning my neck trying to find a gap through the crowd to make some pictures when suddenly, a gentleman in some kind of uniform ordered the onlookers to make way for me to come forward and shoot! I know I had a VIP photographer tag hanging round my neck but I was definitely not expecting this. My Egyptian colleague Ayman, who had also been to the previous Biennial, recounted how two years earlier they even had a police car travelling ahead of their coach to clear the traffic!

As I was flipping through the images that I had just made, I was approached by a Jinan TV cameraman and an accompanying girl carrying a microphone who in perfect English asked me if she could interview me as the cameraman focused on my Nikon's monitor whilst I went through the images. I gladly obliged.

As most of you might know, I am also very fond of photographing the performing arts, particularly dance and was therefore delighted when we visited the Shandong Theatre to watch a Chinese Opera Costume Show. The stage design, costumes and props were so detailed and exquisite.

Personally, one of the highlights of the stay in Jinan was a visit to a place called The Children's Palace. This is an educative institution that opens its doors only on weekends and public holidays with the specific aim of teaching arts and crafts to kids who want to make better use of their free time. We were taken to a class of budding photographers and after watching a slide-show of their work, we commented on it and answered their questions through an interpreter. These kids were totally immersed in the medium and I was captivated by their sheer attention and concentration. 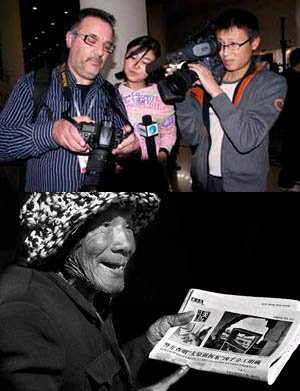 A trip to the medieval town of Zhou Cun and another to the semideserted and crumbling rural village of Zhujiayu provided the majority of great photo opportunities. Zhou Cun is described as "the living ancient commercial complex museum in China". Medieval shops and tea-houses still line it's ancient streets. It is a protected site and has a high historic and tourism value.

Visiting Zhujiayu is like stepping back in time. This village is famous for the longevity of its residents, with many living well into their 90s. Part of the village is derelict, with remnants of crumbling abodes along narrow stone lanes and mud alleyways, whilst other parts still show well-preserved historic buildings dating back from the Ming and Qing Dynasties. The rural community is also very friendly and some of them can be found selling souvenirs and vegetables along the cobbled lanes. A couple of dollars here and there and the shots were in the bag!

It was time to fly back to Beijing and spend the last day before flying back to Cairo. On the way to the airport we had time to stop by the National Centre for the Performing Arts of China, another architectural gem known as The Floating Pearl, with it's elegant dome shape gracefully emerging from a surrounding pond.

It was indeed a great honour to have been invited to participate in the Jinan Photo Biennial and also to be given the opportunity to catch a glimpse of this ancient and yet advanced civilisation that has become an economic powerhouse.

The hospitality shown towards the whole group of photographers was the best I have experienced and the networking was fantastic. Thanks Kevin Casha for suggesting yours truly, the China Cultural Centre in Malta for all their assistance and the Chinese Ministry of Culture for providing the opportunity. I would definitely love to go again as there is so much more to discover.

An exhibition featuring 50 of my photographs was on show at the China Cultural Centre during May and June 2011.