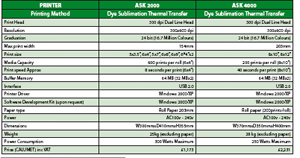 One of the older problems with dye sub was an inability to achieve deep blacks, because they have to be made without a supporting full-black ink. For this reason it was a surprising pleasure to measure a Dmax of 1.91 off the ASK 2000. Metamerism was also low, at 1.2 ΔE Lab. The audit data was remarkably good, one of the relatively rare occasions when bespoke profiling brought us in below a value of 3.00 ΔE2000.

The 'signature' of the audit data was different to the normal inkjet result.

The errors were more evenly spread over the gamut, with the red and orange errors rising above the blue errors (it is normally the other way round). The biggest error was a miserly 9.8 Lab (the red) while the smallest was a minuscule 1.5 (the purple). The all-important skin tones had ΔE2000 errors of 2.6 (Dark Flesh) and 2.3 (Light Flesh), again top notch results.

The visual image was clean and bright with smooth gradations across the grey tone scale and the Granger Chart. There was some slurring of solid blocks of colour, where they met - this is always a weakness of dye sub, but these printers are intended for reproducing photographs, not technical drawings or proofing text!

The gamut volume was a little lower than that acheived with a gloss media and an Epson K3 ink set (899,1000 playing off 736,700). The K3 had more reach in the greens and blues, the magentas were about even and the ASK had slightly more intense yellows (see plot below).

The performance using the FujiFilm drivers was also good, indeed slightly better on the light skin tone. There was a slight overall increase in saturation using the built-in drivers.

One thing that we were provoked into trying was using sRGB instead of Adobe RGB. This seems to be one of the urban myths flying around dye sub and has been used as an excuse for poor performance by some (eg 'the print is poor because you are using ARGB - convert to sRGB'). Doing what we were told was a disaster as the table and the Granger charts show - colour management remains colour management even with dye sub - do it wrong and the print is wrecked! Correctly profiled sRGB and ARGB files print the same.

Overall then we have been impressed with the ASK machines and we are indebted to Gary Galt of Gallery Studios, Warrington who gave us access to his machine. Gary has been using it for rapid-turnaround shots both at his high street studio, and from weddings. Interestingly he has found an additional income stream from using theimagefile to upload and showcase images and can always get the reprints into the return post from his ASK2000. This type of marketing results in small numbers of diverse orders (ie just a couple of prints, posted to each address) but the speed makes it worthwhile - he is halfway to paying for his ASK 2000 after matter of weeks!