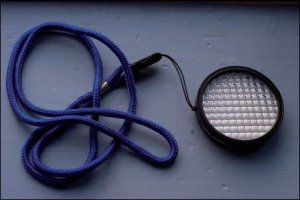 The expodisc was designed by the late George A Wallace. It works by integrating all the light being received by the lens so that a more representative exposure and colour balance may be obtained. It comes with a reassuring quality control card, which informed us that our sample had a density of 0.75 compared with the aim value of 0.745 for a true 18% grey - quite accurate then!

It is equipped with a lanyard (handy on cliff tops) so that it is readily available and (also for speed) it is simply held over the lens front when in use. Various sizes are available and we tested the smallest 58mm one, about right for our 52mmthroated Nikkors.

Obviously the resulting colours are influenced by the accuracy of the camera's metering and the characteristic of the individual chip. Therefore, if you find that the expodisc consistently over- or under-exposes, then you can set an exposure compensation permanently in your camera. To do this, open the plain grey exposure through the expodisc in RAW and adjust the Exposure slider until the RGB value reported in the top right is 121 points. The exposure compensation may then be read off from the box to the right. 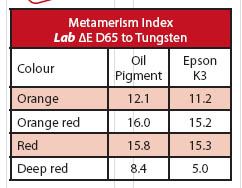 In use, the expodisc is fast and easy - indeed when Monte Zucker demonstrated it at his seminar last year, if you blinked, you missed it! In essence it is used like an integrating incident light meter. You point it at the sun (with the expodisc in place

seemed to be behaving like belligerent sheep, unpredictable and difficult to pin down - once we got a couple of them into the pen, the others had run off! However, persevere we did, and here are the results. The metamerism errors in the Penny Warden pigments ranged from 8.4 to 16 Lab points, this against a backdrop of striving to get the actual colours within 4 Lab points! In other words the error due to lighting variation was four times the error we were shooting for. Initially we ignored the pigments so as to get our bearing on the performance over the whole gamut of the Macbeth Chart.

Corrected files were made and transferred to Photoshop for further analysis. The best exposure was adjusted for both white balance and exposure in Adobe Camera Raw placing the 18%, mid-grey swatch on 121 RGB points in the red, green and blue channels before saving as an Adobe RGB, TIFF file for the calibration software. This file was examined using five refinements: