With apologies for the masses of statistics, the summary data table is shown (right). A number of points emerged from the analysis: 1. The ACR-Calibrator and the SG ColorChecker created the most accurate result. 2. On balance, the ACR-Calibrator just produced the best data set, with a smaller mean error and smaller variations across the range of colours. 3. The CCSG profile was very close to the ACR result and actually came out on top using the more perceptually accurate measure of theÄE2000 reading. 4. Whilst the CC24 profile colours were in general accurate, there was a completely unacceptable level of posterisation in the skin tones of the assistant holding up the charts. This mimics the result found in part one of the article.

Ignoring the data and judging purely on the skin tones of our assistant, the CC24 profile damaged the file beyond repair, the CCSG profile dulled and desaturated a little. The ACR-Calibrator produced a slightly desaturated rendering but spectacularly accurate greyscale neutrality (although the others were very good indeed). The expodisc revealed some serious vignetting either from itself or the MicroNikkor. There was also a colour shift such that the recorded colour temperature varied from 4550K in the centre to 4900K at the image edges. The other calibrators put the colour temperature at 4850K. It is important to stress that, with the exception of the CC24 image, all others would form a sound basis for a really firstclass print and any additional tweaks made for aesthetic reason would outweigh residual errors in the calibration. If we could get all our shots as close as the set, life would be very much easier. On this basis the ACR-Calibrator comes out top because it is free. 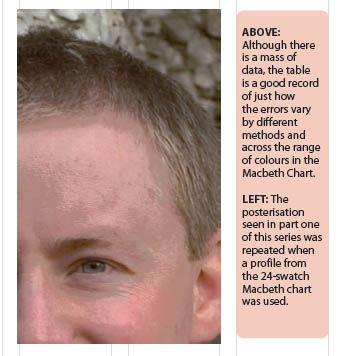 The expodisc was probably the easiest route to follow and a workflow in which the expodisc was used for outdoor general photography and the ACR-Calibrator for critical indoor studio work would suit even the most critical observer. The need for high-end calibration software is only crucial if you need to use the very sophisticated profile editing software, which allows you to surround zones of colour with a "bubble" and tweak them independently of other colours - time did not allow us to pursue this course of action, much as we would have loved to!

using macbeth chartPigment reproduction In order to create the optimum starting files for reproduction of the pigments we found it best to increase the saturation in Adobe RAW by 20 points. This took account of the slight desaturation produced by the printer/paper/profile combination in use. Printing was carried out with a bespokeprofiled Epson 4800, using Photo Black ink onto Epson Premium Lustre Photo Paper (250). The latter was chosen because it had a measured printing error of 2.5ÄE2000, about the best it is possible to achieve. We tried various tweaks to improve the accuracy of the rendering and the colour errors are plotted on the graph.