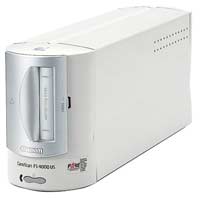 This scanner represents a bit of a landmark in terms of price and performance. For a long time the Nikon Coolscans have held the top position in the 35mm end of the market. Attempts by other manufacturers have resulted in a number of disappointing products and an annoying amount of hype in regard to the numerical figures quoted in the advertising blurb. The move from circa 2500dpi to 4000dpi was started some time ago and, in conjunction with ever-inflated dynamic range and bit depth values, caused a veritable avalanche of words and paper. In most cases the improvements seem to have been achieved by editing the type on the box while the engineers tried to keep up.

The FS 4000 was launched in Mid summer 2001 with a commendable amount of restraint in terms performance claims, perhaps they are cottoning on to the fact that it gets on our nerves! The refreshing thing about the Canon is that it actually "does what it says on the tin". As far as we could ascertain the resolution kept rising right up to 4000dpi, this is real optical resolution, not some software fiddle. The dynamic range (not even specified on the box or documentation) measured higher than some units costing four times the price. The combination of bit depth and dynamic range allowed us to extract image detail from areas of a scan that were initially perceived as dense black. This opens the opportunity of selective enhancement of parts of the image from a single scan using Photoshop and its ilk. 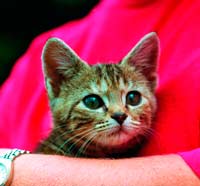 The Cat's Whiskers - The FS 4000 keeps up with the resolution of most negative emulsions.

Concept
This is a scanner that seems aimed at the business office and enthusiast market. The documentation and software interfaces seem deliberately low key. The newcomer to scanning is not burdened with paragraphs of text on resolution, colour space, profiles etc. This is OK because the scanner works so well. For example, you don't have to know how to extract the orange mask from a negative scan because it reads the film margins and does the job for you.

The scanner is provided with both SCSI and USB connectivity (no SCSI card or cable though). It requires 4" of space around it with an additional 13" in front to allow the film strip holder to be inserted. Holders are provided for 35mm film, 2" slides and APS canisters.

There is no support for CMYK. If you need this facility you will have to have the full version of Photoshop (or say Corel PhotoPaint). You cannot convert to CMYK from Photoshop LE, which is bundled with the scanner. This TWAIN compliant imaging program is needed to access the scanner, there is no stand-alone software. Naturally if you already have a full version of Photoshop or Paint you do not need to load LE. 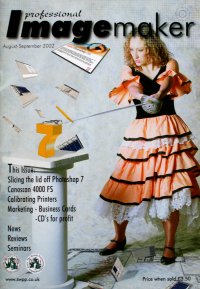