In Part 1 we looked at the structure of colour and colour perception. Part 2 looked at the numerical controls available typically in Photoshop. In Part 3 we look at the initial exposure of an image followed by a logical progression towards the optimum final output.

The exposure of a digital image is quite critical if really accurate colours are to be obtained. Conventional photographers will have a grasp of the relative differences in exposure latitude between transparency and negative emulsions and the fact that it is smaller for a transparency. Digital exposures are about as critical as those for transparency, although there are a number of post-shooting fixes that may be applied. Exposure is more critical on the exposure side by a factor of around 2 or 3. We conducted an experiment in which we shot a Macbeth Chart under constant lighting, but bracketed the exposure in 1/3 stop increments. We then analysed the results for colour error and plotted the data to obtain the graph shown. Note that the error rises more sharply on the over-exposure side. Given that best practice requires colour errors on the order of 4 to 7 Lab points the exposure latitude (for this quality value) is 1/3 of a stop on the over exposure side and 2/3 of a stop on the under exposure side. These results are quite surprising and in practice we obtain more latitude by tweaking our lightness values and hoping that we have not skewed our colour values. Nevertheless the measurements do not lie - it's a tough old world out there!

In addition to the actual exposure value (governed by f-stop, shutter speed and ISO rating), digital photographers must also concern themselves with the colour temperature of their light source. In these days of fast digital adjustment of colour we tend to forget that we used to buy big batches of transparency film, test it with different colour correction (CC) filters and then bung it in the fridge and hope it did not run out too fast! Does anybody still do that out there? Minor variations in lighting, when using negative film, were dealt with at the enlarging stage by CC filtration of the colour head. In digital photography the image will appear on screen "as shot" and if your White Balance is not correct then it will show, usually as an image that is too blue or too yellow. Quality digital cameras have the ability to Auto White Balance, when the chip data is interpreted by the exposure system and corrected on the fly. This is vulnerable to subject failure in the same way as automatic exposure but, like the latter, it works OK a lot of the time. The equivalent of taking an incident light reading to avoid subject failure in conventional photography is to use a grey (or white) card and do a Custom White Balance. As we shall see later this can be dramatically better than letting the camera do the job on its own. As with conventional exposure value adjustment, compromise is sometimes needed in which some parts of an image are sacrificed in favour of more important parts - typified perhaps by letting the groom's black trousers block up in favour of retaining detail in the brocade of the Bride's dress

In summary then, avoid over exposure and keep an eye on your White Balance. Note that Kodak Software has the ability to reinterpret the RAW image data and "recover" up to 2 stops of exposure error. The demonstration we have seen of this feature was impressive - it is accomplished by the RAW data having sufficient dynamic range to cover 12 stops, more than is used to make a print for output.

Assuming that the best exposure has been made and you have arrived home from the shoot with no opportunity to influence the RAW data it is time to examine your images in detail.

Look Before you Leap!

The first port of call back at base is the Levels Dialogue. Click Ctrl-L and check out the shape of the Histogram. Assuming that the data are roughly centred in the middle of the Histogram you can relax and start to make an examination in more detail. Recognise that, confronted with several hundred images after a reception reportage style shoot, you may not have time to spend refining every last pixel at the initial stages.

The first part of a serious examination of the image should be to look carefully over the whole image, taking note of the following: 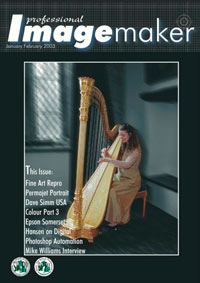